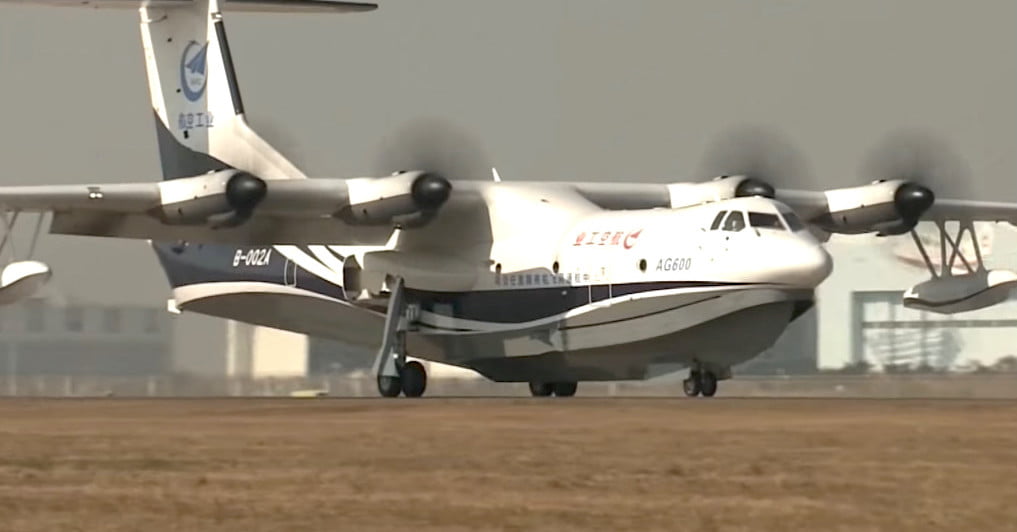 Now here’s an aircraft Captain “Sully” would’ve been more than happy to have landed in the Hudson. It’s the world’s largest amphibious airplane, and this week it successfully completed its maiden flight after eight years in development.

Made by the state-owned Aviation Industry Corporation of China (AVIC), the AG600 has a wingspan of 38.8 meters (127 feet), making it a little larger than an Airbus A320 — the aircraft Captain Sullenberger famously landed in the river off Manhattan in 2009. The new plane is powered by four turboprop engines, has a maximum takeoff weight of 107,000 pounds (53.5 tons), and can carry up to 50 people.

Able to stay in the air for up to 12 hours and fly 2,800 miles, the aircraft’s first-ever flight left from Zhuhai Jinwan airport in China’s southern province of Guangdong, about 50 miles west of Hong Kong. The airport is right by the sea … but is not in it. Indeed, footage of the AG600’s hour-long maiden flight shows it flying over water but not actually landing on it. Or taking off from it. An aquatic takeoff and landing is set for 2018.

Still, let’s assume they’ve done all the tests to prove it can actually handle water-based activities. Certainly, whoever has ordered 17 of the aircraft is convinced of its capabilities.

The plane can be kitted out for firefighting activities and marine rescue duties. Military applications are also possible, and with state media describing the AG600 as a “protector spirit of the sea, islands and reefs,” there’s speculation it could at some point be used in operations in the disputed South China Sea region.

China is investing heavily in developing its own aviation-based engineering industry, and the huge amphibious plane, whose first flight was broadcast live on national TV, is seen as a boost to its long-term ambitions in that field.

Miao Wei of China’s Ministry of Industry and Information Technology, told the media the AG600 demonstrates that “the development of civil aviation industry in our country was lifted to a new level and that our capacity of independent research and development in this area has increased by a big margin.”

While China’s new amphibious aircraft is the largest of its kind in production, it’s not the largest water-based airplane to have ever flown by a long way. That accolade goes to Howard Hughes’ H-4 Hercules, better known as the Spruce Goose, which had a wingspan of 97.2 meters (319 feet) — two and a half times longer than the AG600 — and weighed 400,000 pounds (200 tons), nearly four times that of the AG600.

Intended to transport troops and cargo during World War II, work on building the plane started in 1942. But by the time it was completed in 1946, the war was already over.

In the end, the Spruce Goose only made one very short flight to prove its viability. It took place in 1947 and lasted less than 60 seconds.

The aircraft is now on display at the Evergreen Aviation & Space Museum in McMinnville in Oregon.