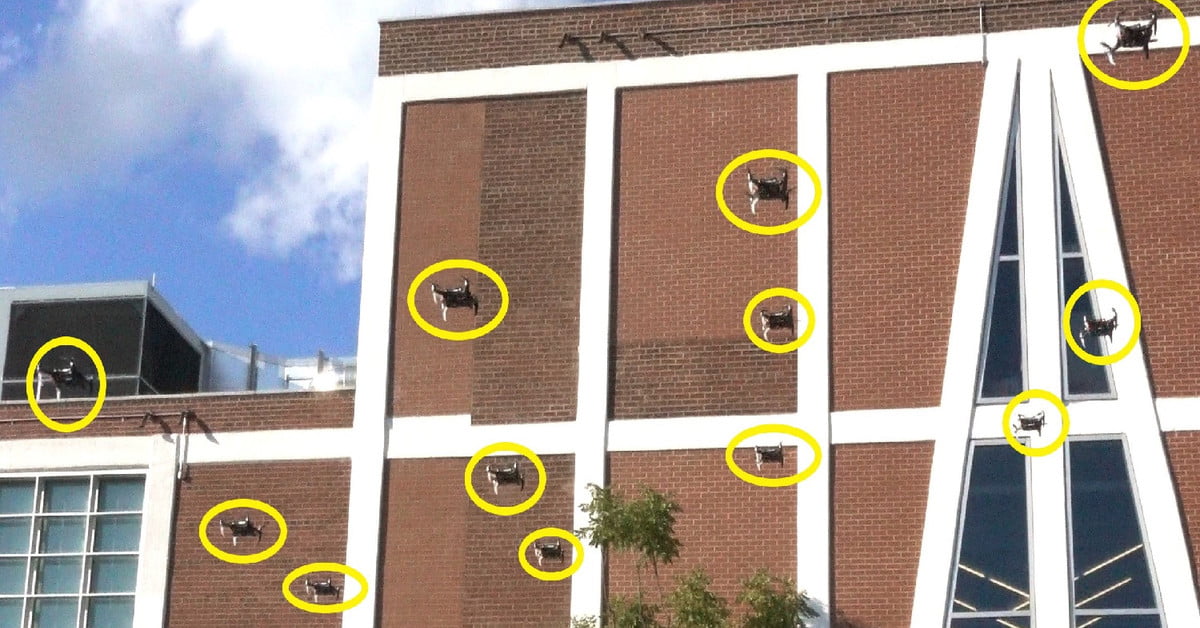 Getting quadrotor drones to work together in swarms can lead to some spectacular, and potentially immensely useful, displays. However, in order for them to function together as a group, most drones rely on technology such as GPS or an external motion-capture system to keep them working together. That is fine in a lot of scenarios, but it is still a limiting factor that reduces where these drone swarms can be used.

Researchers at the University of Pennsylvania may have a solution, however. In a step toward autonomy for flying robot swarms, they managed to teach a swarm of a dozen quadrotors to fly together in formation effectively — using nothing more than a small downward-looking camera with a 160-degree field of view and a simple inertial measurement unit (IMU.) The result is reportedly the world’s biggest swarm of drones not relying on either GPS or motion capture.

“The solution is cheap and inexpensive, and the architecture we propose is scalable and extensible,” Dr. Giuseppe Loianno, a research scientist on the project, told Digital Trends. “These terms are used to refer to the ease of adding additional agents to the system without sacrificing overall performance. This is the first time that perception, planning, and control are combined for autonomous navigation of multiple interchangeable aerial vehicles — up to 12 quadrotors — without relying on GPS or an external motion capture system. We have released all the hardware and software components used in this work. In the future, we want anyone being able to fly a swarm of aerial vehicles without the use of expensive motion capture systems, and in areas where GPS is not available.”

Each drone in the group keeps track of its precise location and then sends updates to a ground station, which sends commands back to the swarm to make them change their location. The drones themselves are not really aware (well, as far as any drone is aware) that it is in a swarm, but rather follows instructions that happen to involve large numbers of drones working together in coordination. The system makes it possible to add more drones or easily reduce the numbers without a problem.

“We are working on robustness, loop closure, and dense environment reconstruction,” Loianno explained, concerning the next phase of the project. “We would like to have a complete distributed coordinated solution, where each vehicle is able to identify its neighbors coordinating with them, while concurrently mapping an unknown environment. The loop closure module will be able to reduce the small drift that occurs with visual odometry, and will also relax the assumption that the vehicles need to start from a known location. We are also working on new tactics to increase formation resilience.”