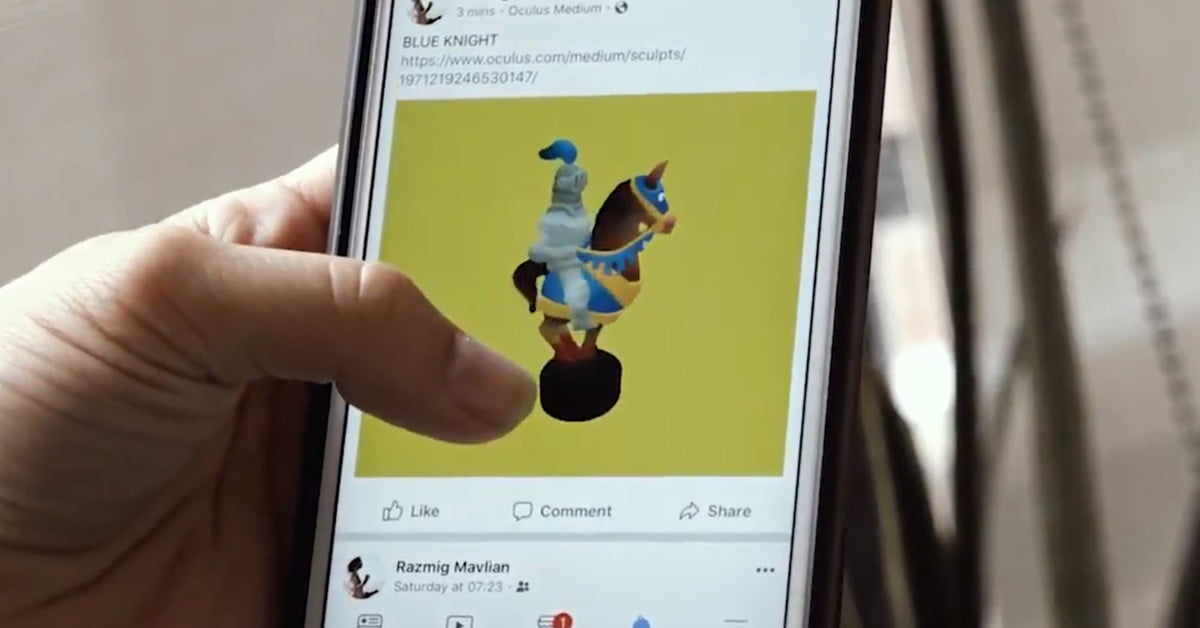 Interactive 3D objects will be coming natively to your Facebook feed in the near future in the form of “3D posts,” according to Facebook’s head of social VR, Rachel Franklin. Facebook’s entry into VR with the purchase of Oculus Rift several years ago seemed like an odd move to some for a social media company, but that forward-looking stance on how technology will bring us together is starting to pay off in interesting ways. The feature was announced during the Oculus Connect 4 keynote address on Wednesday, October 11.

Soon users will be able to create objects in Medium or Spaces, and then share them to their News Feed. Friends will be able to look at the objects from different perspectives and even interact with them. In the demonstration, viewers could slide open and closed the door of a little van in the post. Facebook is currently developing an API that will open that post type up to third-party software as well. VR users will also be able to easily take objects shared on their News Feed and bring them right into their Spaces.

Publish your Medium sculpts from VR to your Facebook feed as dynamic 3D Posts! pic.twitter.com/gQwC3wA28Y

The Facebook News Feed launched at first as a platform solely for text. In the subsequent decade it has expanded to include pictures, video, and most recently live, 360-degree feeds. Adding this new category of shareable content is potentially another major expansion to the site’s utility as a connective tissue between disparate platforms.

The same presentation also included an announcement that 360-degree live-stream videos have been integrated into Spaces, such that friends can now set any live feed as the location for their hangout, expanding upon the announcement from this past summer of 2D live video integration. Users will also be able to create art and objects directly within Spaces using Quill, and then package sets of objects together for things like themed costumes or virtual board games.

Spaces made the news recently when Franklin and CEO Mark Zuckerberg used it to virtually tour Hurricane-ravaged Puerto Rico, which was widely considered an exploitative and tasteless demonstration.

We tried out Spaces this past spring and were intrigued by the smooth experience, but felt it was a bit feature-light. Facebook is clearly investing resources in fleshing out the experience, and all of these upcoming developments have us sufficiently intrigued to keep our eye on it as the platform expands.