The snowplow is the next vehicle to get the driverless treatment 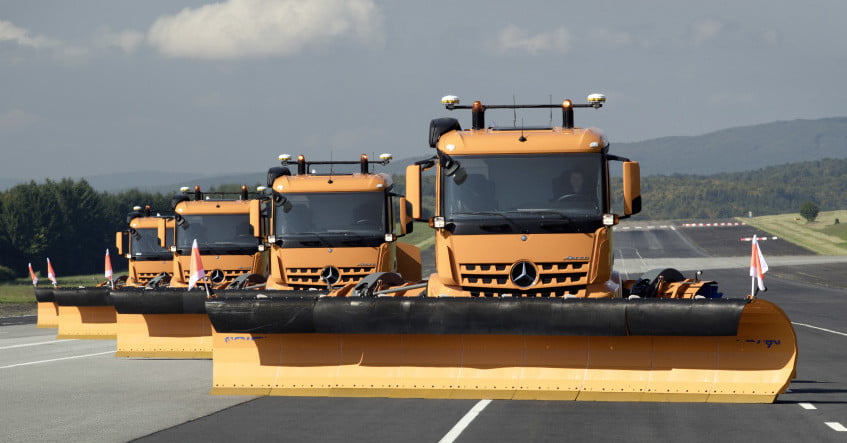 If it means less hanging around in the departure lounge in bad weather, then Daimler’s self-driving snowplow will be a welcome addition to any busy airport.

Hardly a day goes by now without self-driving cars tootling into news reports, and we’re hearing more and more about self-driving buses and trucks, too. They’re testing self-driving trash-collecting vehicles in some countries, and self-driving forklifts as well, so it’s come as no surprise to learn that driverless snowplows are next up for the autonomous treatment.

Mercedes-Benz parent company Daimler, which is already making progress with an autonomous truck-platooning system for increased efficiency on highways, is drawing on its self-driving skills to develop a snowplow for clearing airports in winter. Heavy snowfall can quickly bring an airport to a standstill, causing costs to quickly rack up as planes sit idle on the tarmac. Many large airports need a team on call during the winter months, which can prove costly if the snow is intermittent.

Working with global airport management services company Fraport, Daimler is currently testing its driverless snowplow at the former Pferdsfeld airbase about 50 miles west of Frankfurt, Germany. A recent demonstration at the airbase showed four of the snowplows operating in unison. Similar to Daimler’s truck-platooning system, the front snowplow had a human operator with the three empty vehicles following behind.

The project aims to use the technology in restricted locations, like airports. For this reason, the computer-driven vehicle will rely less on autonomous technology such as cameras, as the routes they take would be mapped and predictable; in other words, free of complex street scenarios and unexpected obstacles like pedestrians. The snowplow convoy would instead rely more on communication with a human-driven plow at the front. This less complex technology also helps to keep down research and development costs.

Daimler said the benefits of using automated snowplows “are obvious,” though it’s likely human snowplow drivers will have something to say about that. “Airfield clearances are hard to predict and thus difficult to plan, especially in winter,” the company explained.

Fraport’s Mathias Dudek said the project “enables us to examine autonomous control of heavy winter service equipment in the especially challenging winter conditions of an airport,” adding, “We hope to obtain findings that will help us to plan the future deployment of equipment even more precisely and efficiently under sudden wintry conditions.”