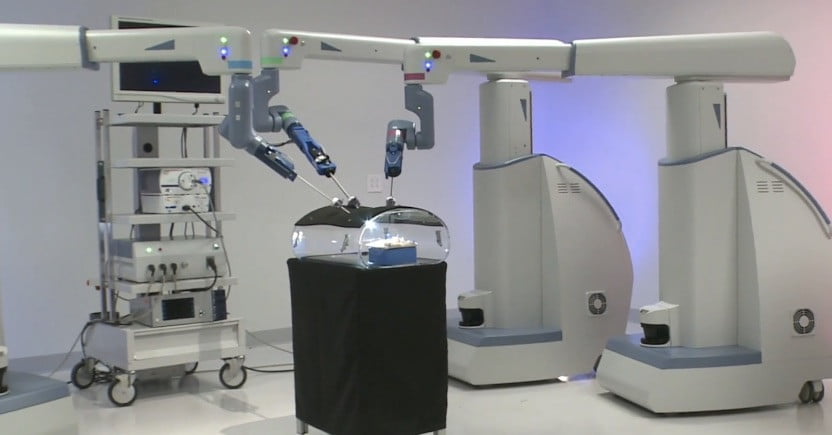 Your surgeon’s assistant during your next operation just might be this robotic system.

We can’t say anything for its bedside manner, but a new robotic system could be a pretty crucial assistant during your surgery. On Friday, the U.S. Food and Drug Administration gave clearance to a robotically-assisted surgical device (RASD) called the Senhance System. Intended to help facilitate minimally invasive surgery, this system allows surgeons to control three individual robotic arms while examining a 3D high-definition view of the surgical field.

Congratulations #ASCRS2017 on a great meeting! Thank you to all who visited the booth to provide feedback on #Senhance#Surgery#RoboticCRSpic.twitter.com/9U66TSaVGa

What makes the Senhance System particularly interesting is its inclusion of force feedback, which allows the surgeon to actually “feel” the tissue he or she is grasping with a robotic arm. So really, it’s as though your doctor grew three additional, extremely dexterous arms. The Senhance System also boasts eye-tracking, which is said to help control movement of surgical tools.

150 patients participated in a clinical study involving the new RASD, and their results were compared to those using another previously approved RASD. The FDA concluded that the Senhance System was just as effective as its peer (the da Vinci Si IS3000 device) for gynecological and colorectal procedures.

“The Senhance System is intended to assist in the accurate control of laparoscopic instruments for visualization and endoscopic manipulation of tissue including grasping, cutting, blunt and sharp dissection, approximation, ligation, electrocautery, suturing, mobilization and retraction in laparoscopic colorectal surgery and laparoscopic gynecological surgery,” the FDA noted in its approval. “The system is for use on adult patients by trained physicians in an operating room environment.”

This marks the first time since 2000 that the FDA has approved a surgical assistant for the abdominal area, according to the company behind the Senhance System, TransEnterix. So if you’re scheduled for surgery in the coming months (though we certainly hope you are not), you may just be able to see the Senhance in action.