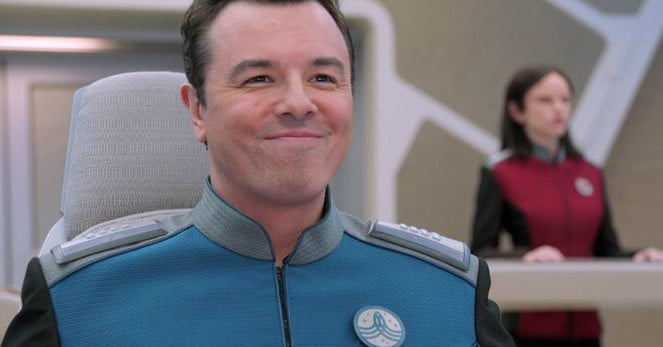 The Orville is a well-made, comedic complement to CBS’ Star Trek: Discovery

In space no one can hear your screams, cries, or fart jokes, unless you are onboard Seth MacFarlane’s sci-fi comedy The Orville. At New York Comic-Con 2017, The Orville cast, including Scott Grimes, Adrianne Palicki, Penny Johnson Jerald, McFarlane, and executive producer David A. Goodman, previewed clips from an upcoming episode. MacFarlane then took things a step further and proclaimed he is “confident there will be a second season” of The Orville.

MacFarlane was unable to physically attend because he was editing The Orville season finale, but he transported himself to the stage via space-age technology Skype. He told all in attendance that his confidence in a second season of Orville is “based on the fan reaction and the numbers.” The numbers definitely appear to be on Orville‘s side. The fifth episode of the season aired on October 5 and attracted more than 3.4 million live viewers. That is more than the 2.84 million viewers Fox’s Gotham‘s attracted on the same night, and more live viewers than any Gotham episode has attracted since the middle of its third season.

The Orville is an intergalactic comedy centering around a crew of aliens, robots, and miscreants traveling space aboard the U.S.S. Orville, getting into trouble 400 years in the future. It has some of the space travel of Star Trek’s yesteryears, and most of the crude humor involving smashed testicles of Family Guy‘s present.

MacFarlane and the cast had more jokes about the attendees than details about next season, but did hint at a potential story arc for season two. “I think next season we’re going to deal with Issac,” MacFarlane said referring to the artificial intelligence robot that keeps the crew in check. “There are character arcs that are introduced in this season that I think are going to go a long way.” When asked by an attendee how many episodes Fox has been ordered for the second season, MacFarlane said Fox has yet to officially order a second season for The Orville.

The audience was able to see into the future as the cast previewed  a few scenes from next week’s episode, entitled Krill. In one scene, Klyden is unfazed after swallowing an entire bowl of wasabi sauce, to the amazement of a few crew members. After attributing his impressive digestive system to his alien race, the crew members put it to the test and starts feeding him napkins, a cactus plant, and a glass cup.

The Orville airs on Fox at 9 p.m. ET every Thursday.