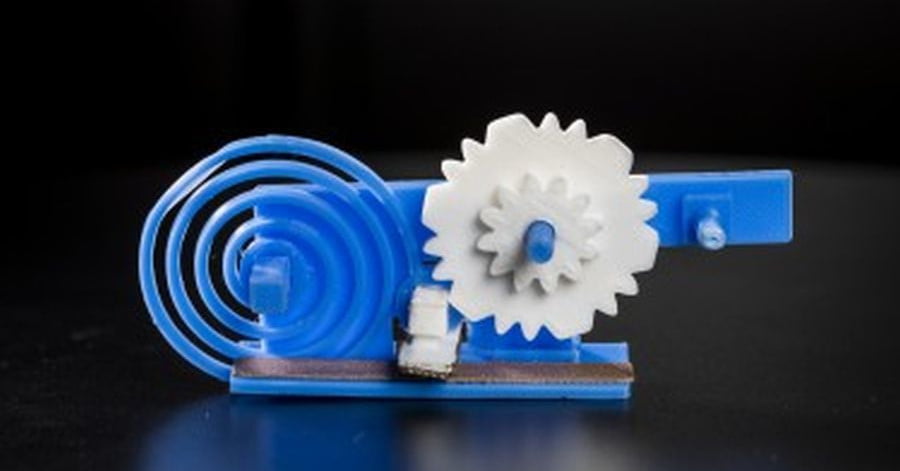 Researchers at the University of Washington have created a way for 3D-printed plastic devices to interact with a wireless network, without using any batteries or electronics. Dubbed “Printed Wi-Fi,” the technique allows the manufacture of printed wireless sensors that can communicate with RF receivers.

The Seattle Times provides more details on the project, which is a product of the Paul Allen School’s Networks and Mobile Systems Lab. It was funded by the National Science Foundation, the Alfred P. Sloan Fellowship, and Google. The plastic devices, created by a 3D printer, include a plastic and copper filament that’s used as an antenna.

The objects use the mechanical movement of gears and springs to trigger a sequence that can be detected and decoded by a smartphone or laptop. As the switch in the object toggles on and off, the metal antenna either reflects or absorbs the ambient signals from a Wi-Fi router.

Justin Chan, a graduate student on the project, compared it to a flashlight beam. The metal antenna is basically a mirror that can deflect or reflect the light, sending the message to a receiver that decodes it.

“Our goal was to create something that just comes out of your 3-D printer at home and can send useful information to other devices,” doctoral student Vikram Iyer explained. “But the big challenge is how do you communicate wirelessly with WiFi using only plastic?”

As one example, the team describes a connected plastic bottle of laundry detergent. The sensor can detect how much is left in the container as you use it. “As you pour detergent out of a Tide bottle, for instance, the speed at which the gears are turning tells you how much soap is flowing out,” associate professor Shyam Gollakota said. “When it dips below a certain amount, it can automatically send a message to your Amazon app to order more.”

The lab has a history of creating low-tech projects that can exist in a high-tech world, such as a battery-free smartphone, or a poster that broadcasts FM radio signals, or smart fabrics that can store data.

Some graduates have even started their own company called Jeeva Wireless that’s aimed at providing connectivity using very little energy or, ideally, no power at all.

The team is also making the technology free to anyone who wants to use it, hoping people will tinker with their prototype designs and come up with something that they haven’t even imagined yet. “There are definitely a lot of very cool things happening,” said Chan.