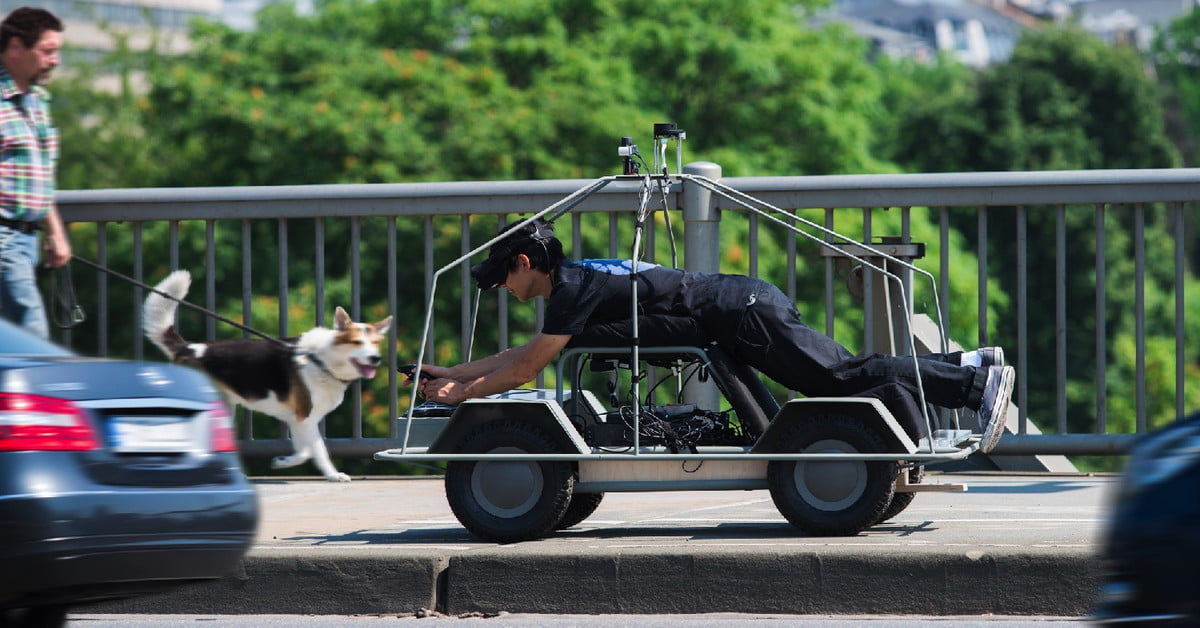 This unorthodox go-cart clues you in on how a self-driving car views the world.

Chances are that, if you haven’t already been in a self-driving car, you’ll get the opportunity to be driven by one in the next few years. But how exactly does this technology, which you’ll be expected to put your trust in, view the world? A new project created by researchers in Germany sets out to answer that very question.

What the folks at Moove Lab and Meso Digital Interiors have created is a vehicle which looks a little bit like a lying-down box cart, and that is equipped with the genuine components that go into a real-life autonomous car. The human pilot wears an Oculus Rift headset, which displays the data gathered from the vehicle’s sensors, and uses this information to control the vehicle by steering it. In essence, it’s a trust exercise designed to give humans the unique opportunity to experience what it would be like to be a self-driving car.

“The project started with the question: ‘how do self driving cars see the world?’” Joey Lee, one of the creators who helped conceive of the project, told Digital Trends. “We wanted to know what it means to see the world through sensors and data, and how that type of sensing informs technologies like artificial intelligence. Since our lab works primarily by making projects that help us express these questions in more tangible ways, we thought about how we might hack together technologies like VR and A.I. to create a more accessible entry point into these topics.”

The main view users see while wearing the VR goggles is one taken from a 3D depth camera, which uses stereoscopic imaging to map the landscape in real time. A video camera on the back of the buggy also lets the driver see in reverse, while a lidar sensor works out the proximity of nearby objects by bouncing light off them. All of this data is fed back to the driver for use in making his or her decisions.

It’s a totally different experience to the way drivers usually see the world, and Lee said that people responded to it in varying ways. Some were excited by the experience of sensing their way through the environment using data, while others found it too intense — which isn’t altogether surprising given the circumstances.

“The interesting responses were with those that tested the boundaries of the vehicle, assuming that any ‘accidents’ they caused could be blamed on the programming of the car, rather than to take responsibility on their own,” Lee said. “On the flip side, others drove much more carefully when equipped with the VR headset. The responses were diverse.”