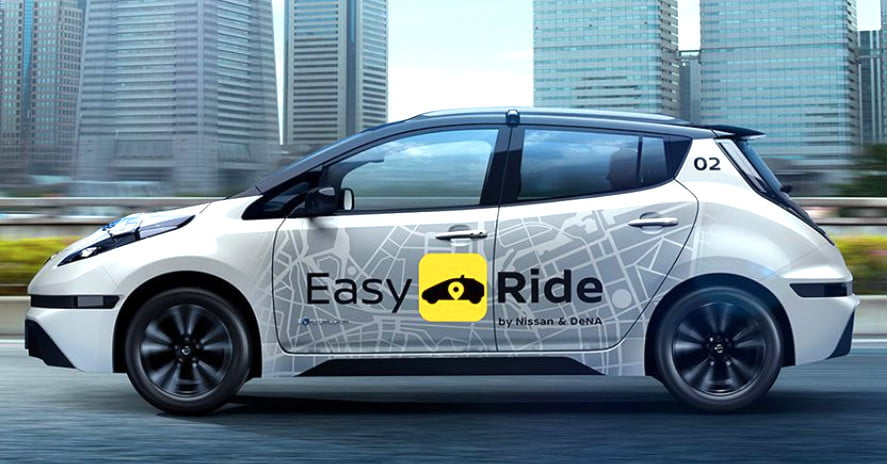 The world’s eyes will be on Tokyo during the 2020 Olympics, so it’s little wonder Japanese auto giants such as Nissan and Toyota are working flat out to get their self-driving technology ready in time for the sporting extravaganza.

Nissan said on Tuesday it plans to start testing an “Easy Ride” self-driving taxi service on public roads in Yokohama in March, 2018, with members of the public offered free rides between destinations around the city. The automaker has been working with local internet and software company DeNA since January this year to develop its driverless technology, which is fitted to modified models of Nissan’s Leaf electric car. An earlier version of the technology was tested in London at the start of 2017.

“With ‘more freedom of mobility’ as its concept, Easy Ride is envisioned as a service for anyone who wants to travel freely to their destination of choice in a robo-vehicle,” Nissan said in a release.

The ultimate goal of the Easy Ride service is to allow riders to complete the entire process via a smartphone app, from summoning a robot taxi to setting the destination to paying the fare.

Just as in the U.S., Japanese firms are also investing heavily in the development of self-driving technology. Besides Nissan, Toyota is building a driverless car, in September unveiling a modified Lexus LS 600hL. The vehicle confused many when they first saw it as it has two steering wheels — an odd-looking design that Toyota said is for testing the transfer of control between the car’s computer and the human driver. Honda also has plans to launch a self-driving car.

Driverless taxi services like the one Nissan is interested in have emerged as the main focus of companies developing self-driving cars, with GM, for example, recently unveiling a bold plan to introduce robot taxis to cities across the U.S. in a bid to boost revenue. GM president Dan Ammann said last week that whereas the company currently receives around $30,000 over the lifetime of a new vehicle that it sells, that figure could grow to hundreds of thousands of dollars for a self-driving car used as part of a revenue-generating ride-hailing service. The American car company wants to test its driverless cars on the streets of New York City from early next year.

Competing with Nissan to build an autonomous ride-hailing service in Japan is local robotics firm ZMP, which has partnered with a Tokyo taxi operator to develop driverless cabs that it wants to have ready for the Tokyo Olympics in 2020.