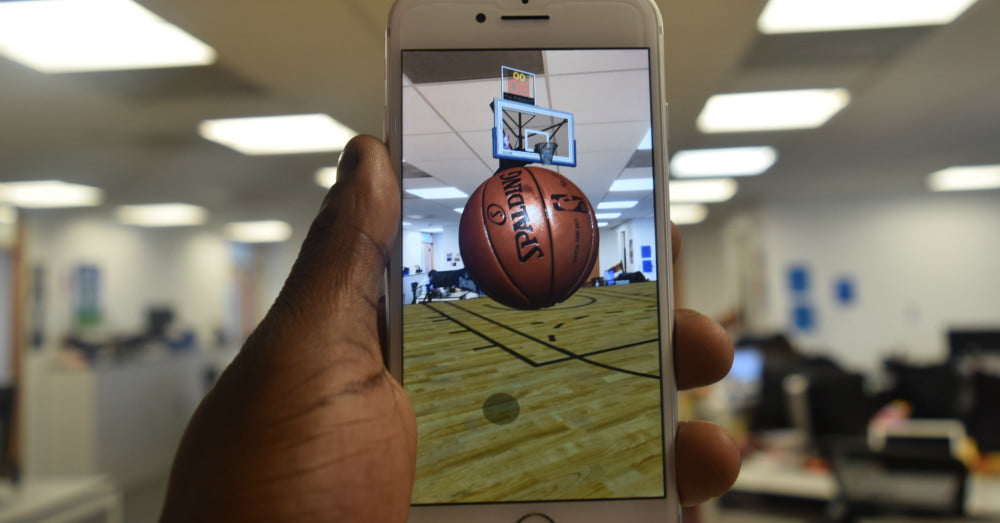 The NBA is the first major sports league to feature its own augmented reality app.

You are not Steph Curry, but now you can shoot like him with your iPhone. On October 16, the NBA augmented reality (AR) app, NBA AR, was released, and it allows you to test your jump shot on a backboard and basketball court no matter where you are.

In NBA AR, once you load the app, you get to choose your the team whose logo you wish to have emblazoned on your augmented court. Then you will be prompted to move your iPhone left and right around the spot you wish to place your court and backboard so the camera can scan your surroundings before plopping some AR hardwood before you. The app suggests playing in a large space with good lighting, including outdoors, but I was able to get some AR court time inside the Digital Trends offices in New York City.

Once the game starts, you have 30 seconds to drain as many jump shots as you can by tapping the screen to have a ball materialize in front of you. You can shoot the ball by simply flicking your phone forward to shoot. Only two-point and three-point shots are counted in the game, but you are free to move around the court, depending on how much space you have in real life. After each game, you are given your score, and prompted with the next game on the schedule of the team you selected.

Augmented reality has started to heat up around the league this year with the Cleveland Cavaliers and Sacramento Kings releasing their own AR apps. “We’ve always said that basketball can be played virtually anywhere – and today that takes on an expanded meaning,” said Melissa Rosenthal Brenner, NBA senior vice president of digital media, in a press release.  “Augmented reality presents a variety of fascinating engagement opportunities, so we hope our fans download the app and try out their skills wherever they might be.”

NBA AR is currently exclusive to the iPhone and utilizes the new ARKit technology that Apple debuted earlier this year. The app is available for free on the App Store, and is compatible on iPhone models 6s and later running iOS 11. The NBA has plans to add more experiences to NBA AR later this season, so you might be dunking in augmented reality before Isaiah Thomas plays a single game for the Cleveland Cavaliers.