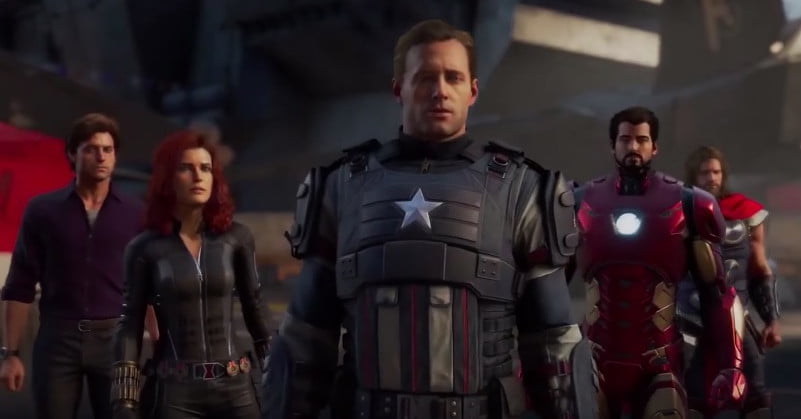 Marvel’s Avengers had an inauspicious debut at Square Enix’s E3 2019 press conference. The cinematic trailer was fine, if a bit jarring due to the new look Avengers. But Square Enix bizarrely chose to discuss the free post-launch content drops rather than talking about what Marvel’s Avengers actually is.

Now that I’ve seen Marvel’s Avengers in action at E3 2019, I can say it has vibes of God of War and Marvel’s Spider-Man. Developed by The Crystal Dynamics and Eidos Montreal, it aptly weaves cinematics and gameplay filled with flashy, satisfying animations. The five superheroes that make up the starting Avengers roster appear to offer different ways to play either solo, or with up to three friends.

The 25-minute gameplay presentation showcased the prologue — essentially a significantly more detailed version of the events covered in the reveal trailer. Cue Avengers Day (A-Day), a grand occasion to open their new headquarters. The festivities are quickly interrupted by explosions on the Golden Gate Bridge. Thor and Iron Man fly across the bay to investigate.

Is that you, Kratos?

The preview admirably squeezed combat sequences in for all of the heroes, starting with Thor. The hammer-wielding god smashed onto the now partially destroyed bridge. Thor’s combat style is a mix of ranged and close range attacks. From afar, Thor threw his hammer at masked, black-cloaked enemies, impaling them into walls before calling his trusty weapon back. The mechanic looks quite similar to God of War’s axe throw.

Marvel’s Avengers isn’t a button masher. The combat has weight to it, making each smack of Thor’s hammer look deliberate and satisfying. While quick time events occurred periodically throughout the preview, they weren’t core to the combat.

On the lower right-hand corner of screen, there were three slots for special abilities that charge over time. The top slot was always empty but was larger than the others, perhaps indicating an “ultimate” ability. By pressing a trigger, gameplay director Remi Lacoste unleashed a devastating aerial attack from above that wiped out several enemies.

Square Enix only showed off solo play, but Marvel’s Avengers is also playable cooperatively with up to four players. While playing solo, other Avengers sometimes came to help out. That’s when Iron Man arrived, shooting at enemies from above. Iron Man, with all of his pricey gadgets, is more of a ranged hero. Once in control of Iron Man, he flew across the bridge, shooting fireballs at enemies below. One of his special moves set everything  below him ablaze.

With things on the bridge turning dire, Bruce Banner dropped in from the Avengers’ ship. He transformed into the Hulk during the descent. The Hulk looked incredibly fun to control. As you can imagine, he’s an absolute unit who specializes in tossing enemies like rag dolls, bashing them into the ground, and even using their bodies as weapons to kill other enemies. The Hulk sequence also showed some mild platforming elements. Hulk leaped across gaps in the bridge, tossing enemies aside and hopping over abandoned cars in the process.

Back on the ship, Captain America was ambushed by a bunch of enemies, some toting guns, others boasting electrified weapons. Captain America’s style somewhat mirrored Thor’s, as he slung his shield like a frisbee. His hand-to-hand combat had a Marvel’s Spider-Man vibe, with successful dodges briefly slowing time.

The final stretch of the prologue followed Black Widow in a fight against Taskmaster, a supervillain best known for his prolonged conflict with Captain America. Taskmaster coordinated the attack on A-Day, and all of his underlings worked hard to keep the Avengers busy.

The boss fight against Taskmaster looked the least like real gameplay. Filled with cinematics, it was sometimes hard to tell what the player would control. Still, Black Widow looked the nimblest of the squad. Her dual pistols offer a flashy way to deal damage from afar. The Taskmaster bout relied heavily on dodging to avoid Taskmaster’s slashes and area of effect attacks. Black Widow’s dodges, from backflips to sidesteps, opened windows to deal damage.

After stopping the threats on the bridge and vanquishing Taskmaster, the Avengers were ready to call it a day. But, as the trailer showed, the bridge attack was just a decoy. The whole city comes under attack, and the Avengers’ ship falls from the sky into the bay.

Fast forward five years. The Avengers are no more, and all superheroes have been outlawed. Many blame the Avengers for the events of A-Day. Others are more sympathetic, as demonstrated by the memorial site of Steve Rogers, who apparently died during his last ditch attempt to save the city.

Though the combat looked great, I’m not sold on the story. Unlike Marvel’s Spider-Man, Marvel’s Avengers has an overly familiar premise. Stories about the world turning its back on superheroes have been told many times before. The performances were impressive, at least. The cast is super-team of voice actors, with talents such as Troy Baker (Bruce Banner), Nolan North (Iron Man), and Laura Bailey (Black Widow) attached.

The graphics are equally impressive, especially the combat animations and environments. Unfortunately, with the exception of Hulk, the character designs are…safe. Perhaps it’s because we’re so used to seeing Robert Downey Jr. as Iron Man, and Scarlett Johansson as Black Widow. But it feels odd to see these unfamiliar faces when everything else about the game is firmly rooted in the lore of recent Marvel films.

I am excited about the prospect of playing Marvel’s Avengers alongside three friends online. It’s unclear how the co-op will work, though. Certain segments in the prologue were obviously designed with one superhero in mind. Throwing another (or three!) into the mix would seemingly mess with the story beats.

Square Enix has said that more playable superheroes and missions will arrive as free post-launch updates. Considering how unique each hero looked in motion, that’s an ambitious promise. The free post-launch content updates could be great, but any time I hear a studio discuss post-launch plans before fully outlining the base game, I get skeptical. Hopefully the launch content doesn’t underwhelm like so many evolving, multi-year games.