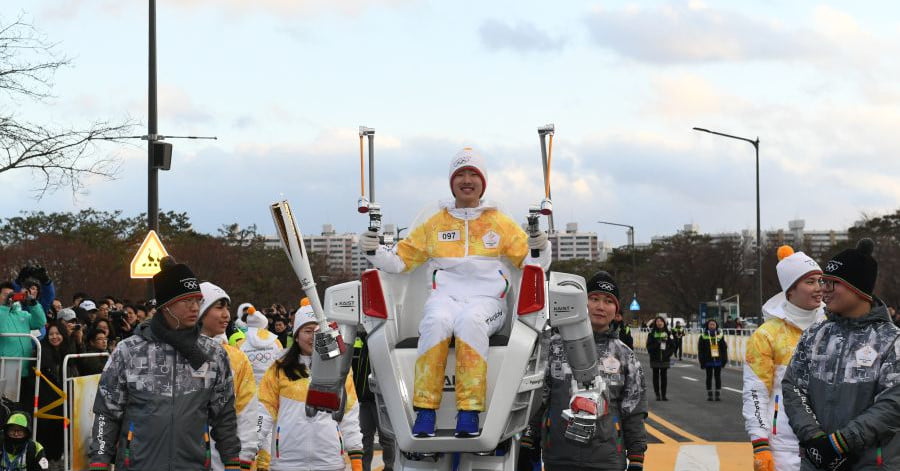 Robots were the stars of the show during day 41 of the Olympic torch relay in Daejeon, as a robot created by the Korean Advanced Institute of Science and Technology (KAIST) carried the torch for a leg of the journey “without fear of cold or even being out there in his birthday suit,” as seen in the above video from Apirang News.

Even more impressive, Hubo took time out from his duties to cut through a brick wall while still holding the torch aloft. Hubo then passed the torch through the hole in the wall to his creator, Professor Oh Jun-ho.

The professor then passed the torch along to another robotic creation, this one a human-controlled “walker” dubbed the FX-2. A joint venture between the Hubo Lab and Rainbow Robotics, the FX-2 was built for the torch relay and revealed to the world for the first time. FX-2 is six feet tall and features two fully articulated hands with five fingers each.

“We aim to be the most connected and technologically advanced Games ever,” Committee President Lee Hee-beom said in a press release. “Today was a chance for us to show the world some exciting technologies that will be showcased during the Games.”

Organizers say it’s the first time a humanoid robot has carried the Olympic torch in the relay, although an underwater robot carried the torch during an earlier leg of the journey.

Another local celebrity also participated in the relay: baseball pitcher Park Chan-ho (he went by Chan Ho Park when playing in the U.S.), a former All-Star who played for seven different MLB teams during his 16-year career.

During the games, South Korea will utilize 85 different robots to assist attendees and maintain the venues, according to Business Insider. Some robots will roam the airport, directing visitors to the various attractions in four different languages. Robotic vacuum cleaners, delivery robots and fishing robots will be also utilized.

The robot revolution will certainly continue, as Japan hopes to have an entire “robot village” for the 2020 Summer Olympics, complete with self-driving cars.