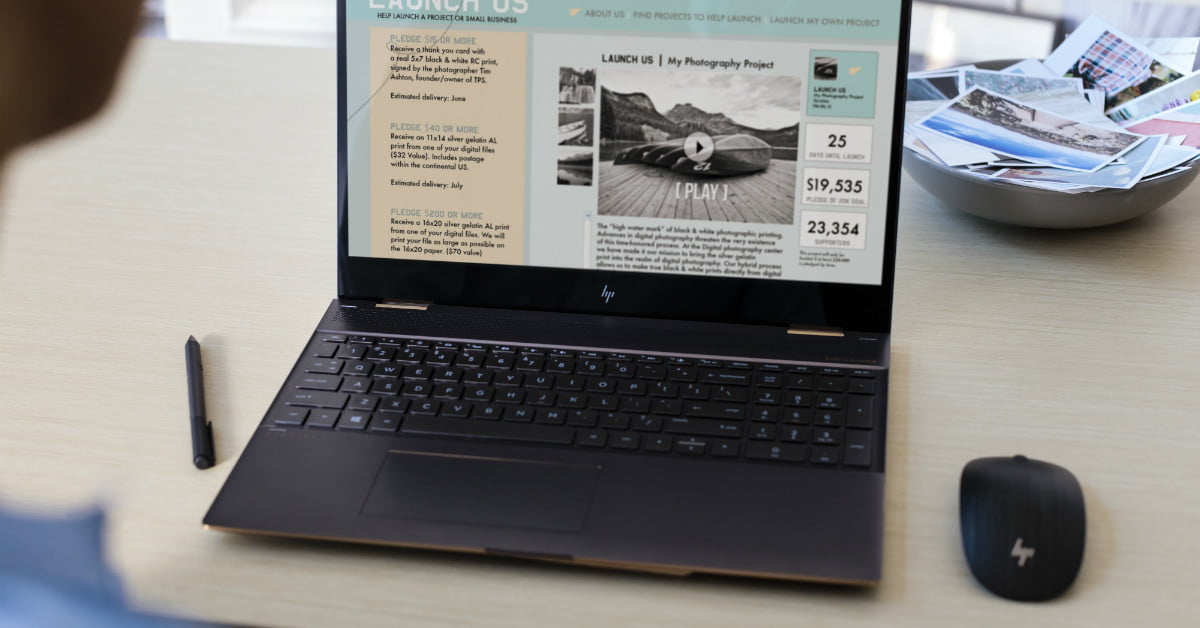 HP recently refreshed a number of its PCs with a handful of revisions, including a significant redesign of the Spectre 13, a refinement of the excellent Spectre x360 13, and some updates to the midrange Envy line.

As CES 2018 gets underway, the company is continuing its efforts to keep its PCs up-to-date, with a refreshed Spectre x360 15, an Intel version of the Envy X2 tablet, an add-on version of the 3D technology included with its Sprout PC, and more.

The Spectre x360 15 was one of our favorite large convertible 2-in-1s in 2017, offering an attractive design, compelling performance and battery life, and a lovely 15.6-inch 4K UHD (3,820 x 2,160, or 282 PPI) display. The machine received a minor update in late 2017 to Intel’s quad-core eighth-generation Core CPUs and Nvidia GeForce MX150 CPU (a slight bump up from the previous model’s GeForce 940MX). Now, HP is making some additional changes to make the Spectre x360 15 an even more attractive and useful 2-in-1, while giving buyers a more meaningful choice of configurations.

Regarding the latter, HP is expanding the Spectre x360 15 family by adding a second member, this one utilizing the Intel Kaby Lake G-series Core i7, a 65-watt CPU that’s mated with an AMD Radeon RX Vega M GPU. The combination promises to offer better performance compared to the combination of the 15-watt Intel Kaby Lake R-series Core i7 and the Nvidia MX150. According to HP, however, the AMD version is 2.5 times faster in graphics rendering, 40 percent quicker in editing and transcoding 4K video to 1080p, and up to 1.4 times the frames per second (fps) in gaming while simultaneously encoding a video in the background.

In terms of design, HP applied the same aesthetic cues as it used to freshen up the smaller Spectre x360 13. The lines have been made more angular, giving the machine a more modern look, while the Dark Ash Silver with Copper Luxe accents color scheme remains the same. HP made the display bezels even thinner (from 6.8mm to 6.3mm on the sides, and from 17.68mm to 17.3mm on top), making for a slightly smaller chassis overall.

The machine is actually slightly thicker, by 1.5mm, to accommodate the new GPU options, along with a battery size increase from 79.2 watt-hours to 84 watt-hours. Battery life is estimated at 13.5 hours for the Nvidia version and 12 hours for the AMD version. The Spectre x360 15 is also a bit heavier, at 4.62 pounds for the Nvidia version and 4.72 pounds for the AMD version (compared to the previous models 4.4 pounds).

HP didn’t stop there, though. It revised the keyboard, moving away from the row of home keys along the right size and squeezing in a numeric keypad. The speakers have been relocated from the sides to below the display, and the audio power was amped up. And, the touchpad has been shifted slightly left to be more centrally positioned with the spacebar and keyboard home row. Finally, HP improved the AMD version with two USB-C Thunderbolt 3 ports, compared to the Nvidia version’s USB-C 3.1 and USB-C Thunderbolt 3 ports.