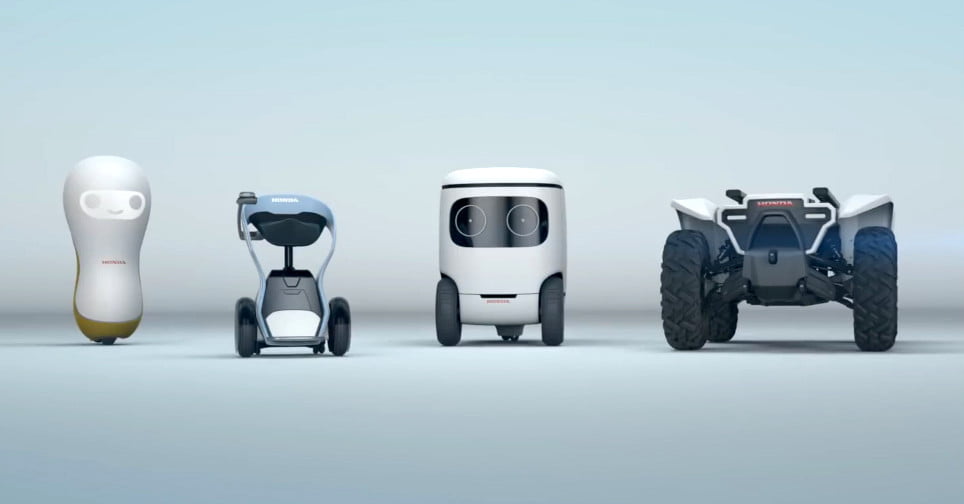 Although better known as an automaker, Honda has long been directing funds to robotics research for personal interactions and mobility, with some of the technology also likely to find its way back to its driverless car project.

It’s a busy time for the Japanese company as the fruits of its most recent work is set to be unveiled at CES in just a few weeks time.

Described by Honda as a “3E (Empower, Experience, Empathy) Robotics Concept,” the four robots incorporate a range of experimental technologies designed for a variety of roles.

First up is the 3E-A18 (no, they don’t have particularly catchy names), described by Honda as a companion robot “that shows compassion to humans with a variety of facial expressions.” In the video, the 3E-A18 can be seen on the far left, sporting a smile so cute it would surely melt the heart of even the most frozen of souls.

Next up is the 3E-B18, a single-seat mobility concept “designed for casual use in indoor or outdoor spaces,” while the the 3E-C18 (can you see a pattern emerging with the names yet?) is a small-sized, wheel-based electric machine with a multi-functional cargo space.

Finally, the 3E-D18, the heftiest and most rugged-looking design, is an autonomous off-road vehicle geared toward supporting people “in a broad range of work activities.”

The designs are all easy on the eyes, a deliberate approach by Honda that in its view makes them more likely to be embraced (perhaps quite literally in the case of the smiley 3E-A18) by certain sectors of society, for example, senior citizens who might initially be nervous of robotic technology.

As these are concept designs, it’s by no means certain that these robots will one day be ferrying people around, carrying their shopping, or grinning broadly at their users, but the technologies powering them could well find their way into similar machines in the not-too-distant future. DT will be at CES in Las Vegas next month to see the robots in action and learn more about what they have to offer.

Honda already has plenty of experience with robotics, the most famous of which is Asimo, which the company claims to be “the world’s most advanced humanoid robot.”

Another of its creations is the Walking Assist device, a hip-mounted unit fitted with small motors, which, as its name suggests, helps those that need some level of support when walking.

And we mustn’t forget the steerable Uni-Cub, shown off wonderfully in one of OK Go’s wacky videos a few years ago.