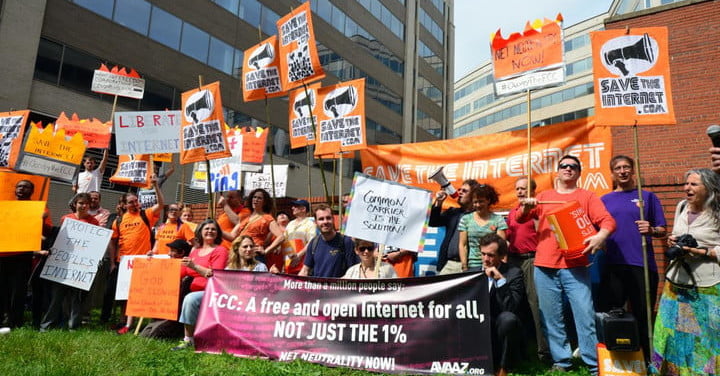 After months of anticipation, the fate of the internet has been decided. On Thursday, December 14, the Federal Communications Commission voted to reverse net neutrality regulations. The Restore Internet Freedom declaratory ruling that passed in a 3-2 vote, meaning there are no regulations in place to stop service providers from blocking or slowing down access to content.

The internet didn’t break down — yet — and people, companies, and organizations have taken to social media to voice their opinions freely. Here are a collection of reactions to the FCC’s net neutrality repeal.

The @FCC voted to roll back #NetNeutality today. History will not be kind to this vote to destroy Internet openness. But this is not over. I&#39;m not stopping here or now–and neither should you. Let&#39;s keep up the fight. Let&#39;s keep raising a ruckus. The future depends on it.

“This isn’t the outcome we wanted, but you should all be proud of the awareness you’ve created. Those who thought that they’d be able to quietly repeal net neutrality without anyone noticing or caring learned a thing or two, and we still may come out on top of this yet.”

“Today’s FCC action rightly restores the light-touch approach to government regulation of the internet that has fostered the development of a vibrant, open and innovative platform. For decades, America’s internet service providers have delivered an open internet — allowing consumers to enjoy the lawful internet content and applications of their choosing. Nothing in this decision alters that commitment — ISPs have stated repeatedly that they do not and will not block, throttle or unfairly discriminate in how internet traffic is delivered.”

My fellow @SenateDems will fight the @FCC’s repeal of #NetNeutrality in courts and in the halls of Congress. We will not allow massive broadband corporations to throttle our democracy.https://t.co/jyhYvFDZzS

“With this vote, the FCC walked away from over a decade of bipartisan efforts to oversee the fairness and openness of companies such as Comcast, AT&T, Charter, and Verizon. These four companies control over 75 percent of the residential internet access in America, usually through a local monopoly. Henceforth, they will be able to make their own rules, subject only to very limited after-the-fact review.”

I will sue to stop the FCC’s illegal rollback of #netneutrality. New Yorkers and all Americans deserve a free and open internet. pic.twitter.com/BNW7TDsp4z

“For more than a decade, under both Republican and Democratic Administrations, AT&T has consistently made clear that we provide broadband service in an open and transparent way.  We do not block websites, nor censor online content, nor throttle or degrade traffic based on the content, nor unfairly discriminate in our treatment of internet traffic … In short, the internet will continue to work tomorrow just as it always has. Despite the existence and the enforceability of all of these commitments, we have, since 2010, also repeatedly called for a non-Title II legislative solution that would make these consumer protections permanent.”

We’re disappointed in the decision to gut #NetNeutrality protections that ushered in an unprecedented era of innovation, creativity &amp; civic engagement. This is the beginning of a longer legal battle. Netflix stands w/ innovators, large &amp; small, to oppose this misguided FCC order.

“The FCC’s smart broadband protections encourage continued network investment, which is a win for rural Americans. Those winding country roads are intersecting with a vast information superhighway to improve local economies, education, and quality-of-life.”

Why are we talking about #NetNeutrality like it’s about saving memes? Without access to the internet, it’s almost impossible to apply for a job or college or pay your bills. @AjitPaiFCC just made poor people poorer and rich people richer.

“The internet industry opposes Chairman Pai’s repeal of the 2015 Open Internet Order. Today’s vote represents a departure from more than a decade of broad, bipartisan consensus on the rules governing the internet. Relying on ISPs to live up to their own ‘promises’ is not net neutrality and is bad for consumers.”

Washington state will act under our own authority, our own laws and our own jurisdiction to protect #NetNeutrality for all of Washington&#39;s citizens. pic.twitter.com/K5eE1o5W6R

“Today’s vote paves the way for a free and open internet, which everyone agrees is essential for growth, innovation and consumer opportunity. We strongly support the FCC’s new plan, which achieves this goal by relying on smart technology and technologists, rather than on restrictive regulations and lawyers.”

“Today’s vote is a stain on the FCC. For decades, the FCC prided itself on being careful, deliberate and transparent in its mission to keep the internet open for free speech, commerce, and innovation, while maintaining incentives for broadband providers to invest. This FCC has failed to live up to that standard.”

We will continue to update this article with more reactions.