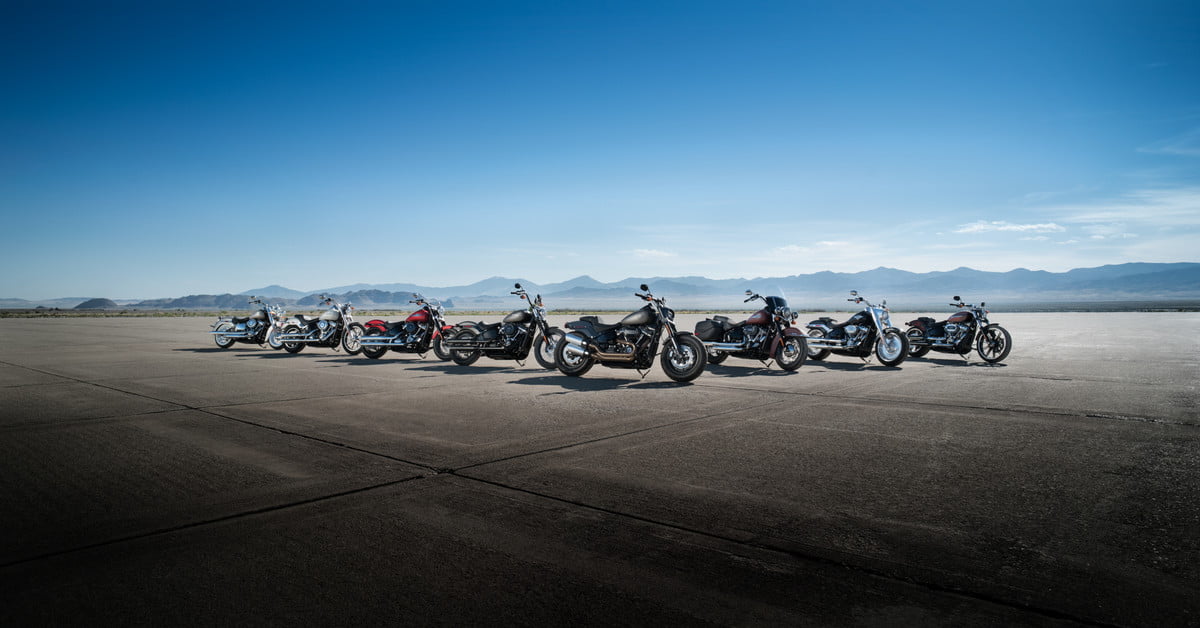 Harley-Davidson celebrates its 115th anniversary with the 2018 model year. In addition to six motorcycle “family” groups with 31 distinct models, the Milwaukee company launched 10 distinctively styled 115th Anniversary editions. When you add four Softail models available with one of two different engines, the 2018 model count jumps to 45.

Harley already promised to launch 100 new models in the next 10 years, including a full line of electric-powered motorcycles. According to Harley-Davidson Museum Vice President Bill Davidson in a conversation with Drive, the ebikes won’t have the distinctive 45-degree V-twin “potato-potato” sound. Instead, the electric motorcycles will produce a unique sound similar to a jet fighter.

The biggest change for 2018, one that has some Harley purists unhappy, is the abandonment of the Dyna line in favor of a completely reworked Softail family. The new Softails merge model names previously associated with Softail and Dyna families. The eight Softail models look familiar at first glance, but from the tires to the suspensions, lights, and frames, the changes are significant.

Other than the Softails, the remaining Harley groups are largely unchanged in 2018 except for colors, but we’ll hit the highlights of each family and model below.

The Street Rod also has a 749cc engine, but it’s high-output version of the Revolution X with more power and greater torque. Additional differentiators from the Street 750 include drag-style bars with bar-end mirrors, new 43mm inverted front forks and piggyback reservoir rear shocks, and 17-inch wheels front and rear. The Street Rod’s starting price is unchanged this year at $8,700.

The five 2018 Sportsters are unchanged from 2017; perhaps they will have wholesale changes at some future year. The only significant change Harley-Davidson calls out for the 2018 Sportster line is the 1200 Custom’s race stripe graphic and a mix of black and chrome finishes. Sporsters have either 883cc or 1200cc 45-degree Evolution V-twin engines and five-speed transmissions with belt drive. Sportster family starting prices range from the $8,700 SuperLow to the $11,300 identical prices for the Roadster and Forty-eight.

The SuperLow gets its name from its confidence-inspiring low seat and low center of gravity. This model has the 883cc Evolution engine and adjustable suspension. The SuperLow’s $8,700 starting price is $100 more than last year.

A pioneer of raw, blacked-out, stripped-down custom style. The Iron 883 is blacked-out from the exhaust system and engine right up to the headlight case. This model has bobbed fenders and works the whole bobber look in a “smaller” Harley. Last year’s Iron 883 started at $50 less than the 2018 Iron 883’s $9,000 base price.

The Sportster 1200 Custom’s black-and-chrome visual theme. The 1200c’s 1202cc Evolution V-Twin engine mixes black and chrome components and hooks up to a chrome exhaust. The black-rimmed laced wheels are new. Riders upright with the 1200c’s pull-back handlebar and mid-mount foot controls. The starting price for the 1200 Custom is unchanged this year at $11,000.

The Roadster’s $11,300 price stayed the same in 2018 for the performance-styled ride. Power by the 1202cc engine, the Roadster has 43mm inverted front forks, dual disc brakes, and an adjustable rear suspension. Riding on 19-inch front and 18-inch rear wheels, the Roadster has a two-up seat, lowered handlebars, and mid-mount foot controls.

Harley refers to the $11,300 unchanged starting price Forty-Eight’s look as a bulldog stance. Combine the 1202cc Evolution engine with large diameter 49mm front forks, an adjustable rear suspension, single seat, mid-rise bars, and fat tires on 16-inch cast aluminum wheels and the Forty-Eight gives an immediate impression of streetfighter readiness. The Forty-Eight is the only Sportster available in a 115th Anniversary edition for $12,000.

The eight new Softail models intentionally blend Dyna and previous generation Softail looks. The vision was to improve handling and performance as well as comfort. The Softails have a new, lighter but stiffer frame to hold the Milwaukee-Eight 107 and 114 engines. The Softails also use new Showa SDBV suspension technology with racing-style cartridge forks with linear damping characteristics. The adjustable monoshock rear suspension allows the Softails to look Dyna-hard but it rides softer and faster. At least, that’s the design goal. Softail price comparisons with last year’s models make no sense because except for their names and styling, they’re new bikes.

With its mini-ape bars, laced wheels, and chopped fenders, the blacked-out Street Bob is a Harley take on cutback bobbers. Mid-mount controls mean your feet won’t be reaching forward while your arms are held high.

The new Softail Slim adds a Daymaker Signature LED headlamp, Hollywood-style bars, and a tuck and roll style seat for a second take on a Softail bobber, joining the Street Bob.

The 2018 Fat Boy, starting at $19,000, is unique in Harley-Davidson’s lineup because it’s the only bike available in four distinct versions. The new Fat Boy model, a buyer favorite since Arnold Schwarzenegger stole one in Terminator 2, has a 34 percent stiffer chassis, 29 pounds less weight, improved front suspension, and a high-performance rear monoshock. The other versions are the Fat Boy 114 starting at $20,300, and two Fat Boy 114 115th Anniversary editions in Anniversary Denim or Anniversary Two-tone for $21,200 each.

Anyone could be excused for thinking the 2018 Deluxe is a much older model. With its full fenders, whitewall tires, and chrome-heavy styling the Deluxe covers up all the new tech and even its 31 pound weight loss for a better handling, more powerful ride with a classic look.

The 10 big Touring bikes comprise Harley’s largest motorcycle family. True to their name, the touring bikes are built for comfort on long roads with fairings and windscreens, seats designed for all-day comfort for rider and passenger, saddlebags, six-gallon gas tanks, electronic cruise control, and linked front and rear brakes. Some of the long-haulers have infotainment systems so you can keep in touch and have entertainment on the road.

There are no major changes in the 2018 Road King, the least costly of Harley’s touring full-size bikes.

The new model year brings a menu of updates to the Road King Special, which accounts for its $22,000 starting price, $3,000 more than the non-Special version. Among the changes are blacked-out styling, gloss black turbine wheels, stretched saddlebags, new mini-ape bars, and new front and rear suspensions.

The Street Glide Special for 2018 starts at $26,000, with a $1,000 bump for the 115th Anniversary Edition at $27,000. The Special version of this bike is blacked out from front to back plus it has reshaped primary drive and air cleaner covers for improved leg room.

The 2018 Electra Glide Ultra Classic starts $100 more than last year’s model at $24,250 but has no significant changes. In addition to this touring bike’s traditional look, it is set up for two with a wide passenger area with back and armrests.

A premium luggage carriers and one-touch saddlebags, batwing fairing for improved airflow, and a premium infotainment system with a 6.5-inch touchscreen display and navigation top the Ultra Limited’s feature list, unchanged from 2017. This bike starts at $27,000 and a 115th Anniversary Edition starts at $28,000.

Dual Daymaker LED headlamps and its shark-nose fairing differentiate the Road Glide from Harley’s other big touring bikes. The 2018 Road Glide starts at $21,300 and is unchanged from 2017.

The Road Glide Ultra remains the same for 2018 with a $100 increase in its $26,400 starting price. The Ultra doesn’t have the Special’s stretched bags and blacked-out look, but it adds a large passenger seat and a Tour-Pack luggage carrier.

Harley-Davidson limited edition CVO models are exercises in design and embellishment for owners seeking the best components available without going to a custom house. The lineups change from year to year, but each CVO model focuses on factory-installed performance enhancement, innovation, and styling. This year’s factory customs are the CVO Limited, the CVO Street Glide and two CVO Road Glide models.

Hit the road with the 2018 CVO Limited and you will find Harley used the full parts and accessories list, including premium heated seats with backrests for rider and passenger, remote locking luggage, and dual wireless headsets. You also get custom LED lighting, a Tour-Pack luggage carrier, tire air pressure monitoring and a remote fob for the security system. Starting at $42,950, for $1,000 more you can buy the 115th Anniversary Edition CVO Limited. At this price level, why not go all in?

The CVO Road Glide is the sole new model in Harley’s 2018 lineup. With its $41,400 starting price, this fully-loaded Road Glide has a custom 21-inch front wheel and fender, a unique exhaust system, and a suspension specially set up for the larger front wheel.

No changes show up in the Trikes for 2018, other than the Tri Glide Ultra’s 115th Anniversary edition. The two Harley three-wheelers are built for long-haul comfort and handling. The Trikes have liquid or twin-cooled 1746cc V-Twins with electronic throttle control, hydraulically linked brakes with ABS, and LED Daymaker headlights to show the way.

If you lose the Tri Glide Ultra’s fairing and windshield, passenger-friendly seating and luggage box, and don’t need an infotainment system, the Freewheeler, starting at $26,450 is focused more on cruising than touring for about $8,000 less.

This year’s Tri Glide Ultra, starting at $34,500 is joined by a 115th Anniversary Edition that starts at $36,250. Harley equips the Tri Glide Ultra for comfortable long-haul touring for two on three wheels. You have room for most everything but family pets in this bikes 6.8 cubic feet of storage.