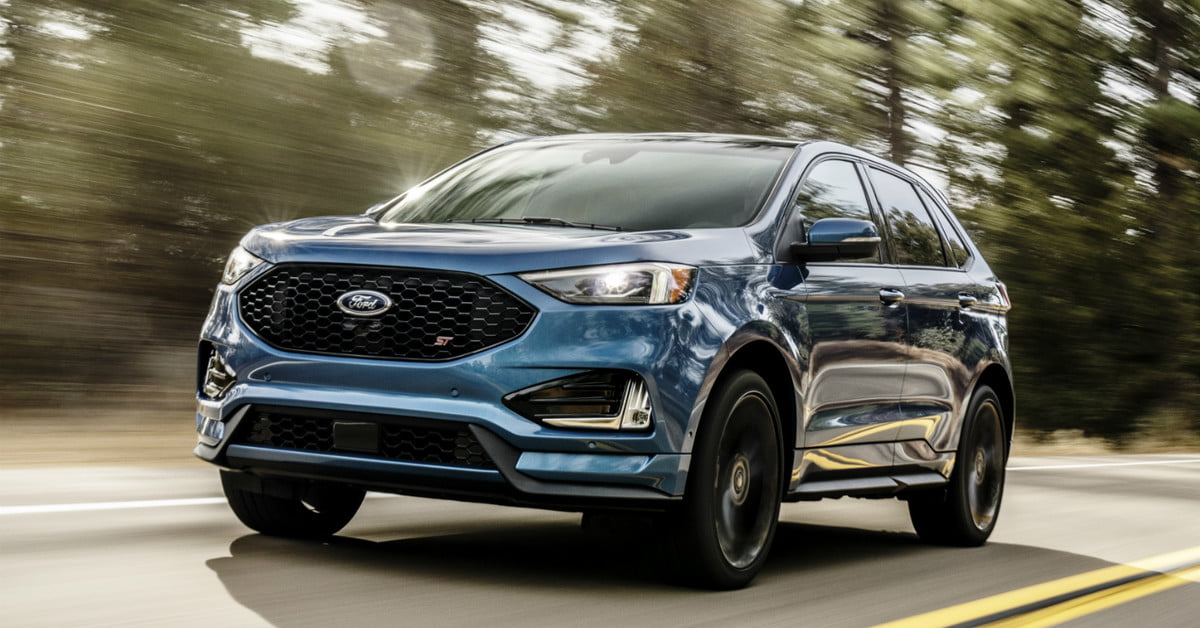 As automakers have been wont to do in recent years, Ford unveiled a couple of all-new models ahead of next week’sDetroit auto show. The stars of the invite-only, no-photos-please event were the much-anticipated 2019 Ford Ranger and a competitive treatment to the updated 2019 Ford Edge. The shiny new models were shrouded in more than just their silk coverings, however.

Recent industry news included the seemingly cease-and-desist of the Fusion midsize sedan after 2020, and Ford announcing $1.2-billlion investment in support of truck and SUV production in Michigan. It’s no secret that small car sales are slumping and have been tied to relatively low profit margins to begin with. Crossovers and trucks, on the other hand, continue to enjoy robust sales with attractively higher transaction prices. So, what’s this mean for the Blue Oval company and its full-line portfolio? More money, honey. Global warming can wait.

Ford unveils its newest truck and SUV ahead of the Detroit auto show.

At a community center not too far from corporate headquarters in Dearborn, Michigan, Ford showcased its latest big-wheeled toys. Arriving in showrooms later this summer, Ford introduced the refreshed 2019 Edge but with an all-new twist in the racing-inspired Edge ST. Yup, this Ford Edge will be the first SUV ever tuned by the Ford Performance team.

Seemingly targeted for the enthusiasts who now live in captivity in suburban wastelands, the Sport trim was dropped to make way for the ST model, which will feature specific styling, a sport suspension, and performance tuning. Outfitted with a performance-focused 2.7-liter twin-turbocharged V6 EcoBoost engine, the Edge ST will be the most powerful V6 engine in its class, with an output of 335 horsepower and 380 lb-ft of torque.

All other Edge models will feature an updated 2.0L four-cylinder EcoBoost engine with 250 hp and 275 lb-ft of torque. This includes a 5-hp increase over the previous model as well as improved fuel economy thanks to standard auto stop-start technology.

The 2019 Edge also will feature a Ford-first with the introduction of an all-new 8-speed automatic transmission. Other new-to-Ford and/or segment-first features include driver-assistance technologies such as post-collision braking, evasive steering assist, and adaptive cruise control with lane centering.

Post-collision braking will be available in a non-luxury SUV for the first time ever and is standard on all Edge models. Also a non-luxury SUV first is evasive steering assist, which enhances last-minute steering and maneuverability around slow and stopped vehicles. The ACC with stop-and-go technology also includes the segment-first lane centering feature.

Ford Edge ST is the first-ever SUV to be tuned by the Ford Performance team.

Now when speaking about the Ford Ranger, however, the automaker was more mum and provided only crumbs in terms of specifications. But at least we had a couple of completed examples to gawk at.

At first glance, the midsize pickup truck’s presence is anything but middling bringing to the forefront just how different modern dimensions are in comparison to a segment’s forefathers. TL;DR: today’s Ranger was yesterday’s F-150. Yet garages remain the same standard big-enough-for-a-crossover size.

The prototype models resembled baby F-150s and Ford was transparent regarding the inspiration for this North American-market Ranger. Although long available in other countries, the Ranger has been absent from North America in both sales and production since 2011. But why resurrect the truck now? FOMO.

Truck sales continue to grow, led by the F-150 large pickup, which has been the best-selling vehicle in the U.S. for five straight years. Separately, the midsize truck segment where Ford has no presence has seen an 83-percent uptick in sales since 2014. With the Ranger being the best-selling pickup in Europe, South Africa, and New Zealand, there is an obvious opportunity for Ford.

The North American Ranger will be based on the current global Ranger’s platform, but built in Michigan and feature reengineered framework and parts. Its body will be composed of mostly steel with some aluminum panels such as the hood and tailgate.

The all-new 2019 Ford Ranger will be built in Michigan and has been reengineered for the North American market.

Power will be provided by a 2.3-liter four-cylinder EcoBoost engine, although no performance numbers were provided, Ford is targeting the Ranger to offer best-in-class torque. The vehicle also underwent the same testing as its F-150 big brother to ensure that its capability and comfort stand up to the rigors of whatever consumers had in mind, whether city cruising or country climbing.

The terrain management system will offer four drive modes which can be switched on the fly: normal, mud/ruts, grass/gravel/snow, and sand. Additionally, as part of the FTX off-road package will be a new-to-Ford trail control system which will essentially act like low-speed cruise control on non-asphalt surfaces.

The 2019 Ford Ranger will come standard with the same 10-speed automatic transmission available in the F-150 but be a segment-first feature for midsize trucks. The five-passenger pickup will be available in extended and crew cab configurations and offered in XL, XLT, and Lariat trim levels. Additional appearance and off-road packages also will be available. Production is scheduled to begin at the end of the year.