I like to imagine the folks at Street & Racing Technology (SRT) occupy an oversized basement at parent company Fiat Chrysler Automobiles’ (FCA) office. There’s no elevator to this basement, only a narrow, dimly lit staircase that descends beyond sight. Follow the cement steps for long enough and you’ll reach a metal door with the words “No Accountants Allowed” smeared on its face in red finger paint.

Assuming you don’t get a kick out of balancing corporate books, you crack the door for a peek inside. At the far end of the room, a single light bulb dangles from overhead, illuminating a small conference table and a half-dozen faces. They’re arguing about something, but you can only make out the words, “bigger,” “louder,” and “faster.”

Behind the table, you spot a whiteboard with advanced formulas and 3D model printouts. Pinned to the board’s frame is a smattering of crayon drawings: supercharger blowers protruding from hoods, side-piped exhausts on school buses, and what appears to be a unicycle wearing a drag tire. 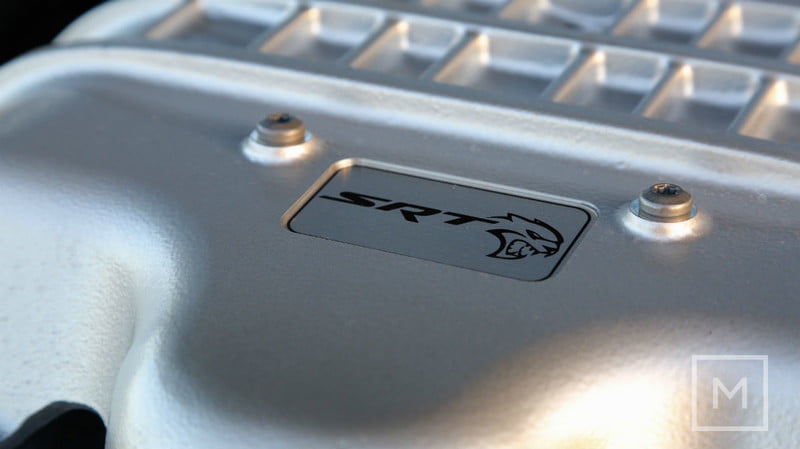 Worried you might be spotted, you quietly close the door and pause to collect your thoughts. What in the world did you just witness? Convinced no one would believe you anyway, you attempt to put the basement scene out of your mind.

Months go by and you’ve almost completely forgotten about … whatever that was. Sitting at your desk at work, a colleague stops by to chat. “Have you heard about the new Dodge Unicycle SRT Weasel?” he asks. You stare blankly at his excited expression. “Here,” he motions, pushing his iPhone into your hand. Peering down, you feel your jaw loosen. Turns out, you have heard of the SRT Weasel — only it looked a little different pinned on the basement whiteboard.

Yes, I do have an overactive imagination, but so do the guys and gals at SRT. They may not build unicycles, but their production vehicles aren’t far off: an 840-horsepower muscle car that does wheel stands, a sedan that makes as much power as a McLaren hypercar, and now an SUV that can reach 60 mph faster than a Corvette Grand Sport. Ask SRT and they’ll tell you customers requested these monsters, but I get the feeling no one’s arm was twisted in that imaginary basement.

So here I am, cruising along the streets of Southern California in a Jeep Grand Cherokee. To my right, another Grand Cherokee ambles along with a 30-something mom at the wheel and her toddler daughter strapped into a booster seat, barely peeking over the rear window frame. Everyone around us, no doubt, sees two Jeeps without distinction. I can’t blame them; the 2018 Jeep Grand Cherokee Trackhawk is only distinguished by a quad-tipped exhaust system, a single “Trackhawk” badge on the tailgate, yellow brake calipers, and fog light deletes in the front fascia. 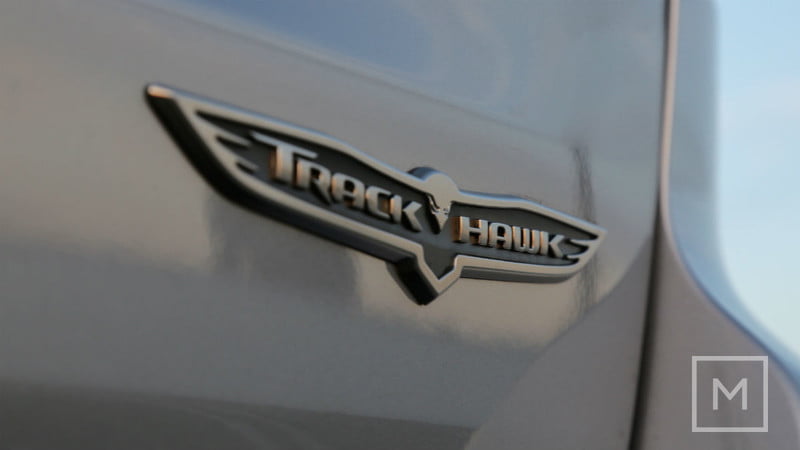 I feel obligated to inform the public of our vastly different casts (this mom-mobile and I). Pausing at a stoplight, I switch the Trackhawk’s drive mode dial to “Track,” hit the Launch button, and jam my foot on the brake. The light turns green. My right foot plunges the throttle as my left abandons the brake. All four wheels dig into the tarmac, surging the Jeep forward without hesitation. Glimpsing the image in the rearview mirror, my Grand Cherokee companion appears to be waiting for the next light cycle, or rather advances so slowly its progress is imperceptible.

We aren’t so alike, you and I.

Indeed, the likeness is only skin-deep. Beneath the surface, the Trackhawk gets a more robust ZF eight-speed automatic transmission, differential, and other important bits to suit 707 horsepower and 645 pound-feet of torque. With light modification (and a marginal loss of torque), the Hellcat’s 6.2-liter supercharged V8 fits neatly under the Grand Cherokee’s hood. Four-wheel drive propels the 5,280-pound SUV to 60 mph in 3.5 seconds and on to a top speed of 180 mph. Only the Tesla Model X P100D is quicker to 60 mph (provided it has enough juice), and only the Bentley Bentayga and Lamborghini Urus have higher top speeds (186 and 190 mph, respectively).

On paper, the Trackhawk sounds unwieldy, like toy snakes trapped in a tin can, waiting to surprise some poor Joe the moment he cracks the lid. In reality, it’s as tractable as turning a knob — literally. The torque split between axles, throttle response, shift aggression, and steering weight is all managed via drive mode. Leave the Trackhawk in Auto, maintain a healthy relationship with the throttle, and it’s a typical SUV. You can tote five passengers in comfort, cram 36 cubic feet of stuff behind the rear seats, and tow 7,200 pounds. The seats are plush, the 8.4-inch UConnect infotainment system is state-of-the-art, and the available 19-speaker Harmon Kardon sound system is stellar.

This much power in an SUV should feel as refined as those crayon drawings, but much like other SRT products, engineering savvy prevails. It totes an EPA estimated 13 combined mpg, a barking exhaust note, and an $86,000 price tag.

Geniuses with a sense of humor — that’s who built this car. No accountants allowed.