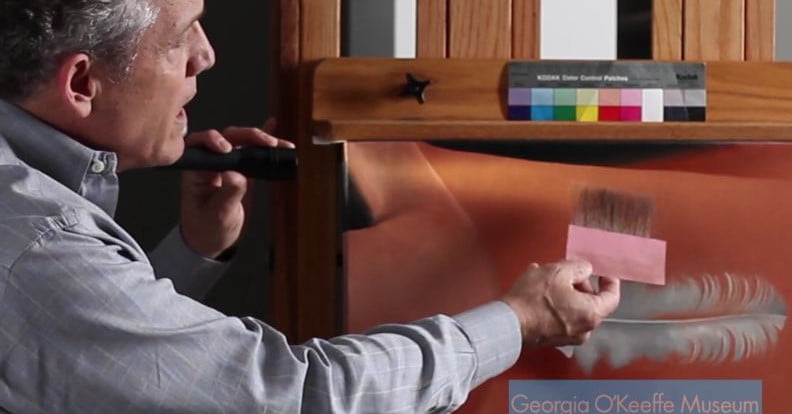 Georgia O’Keefe was an American artist whose career spanned six decades and more than 800 paintings. Her painting Jimson Weed was sold in 2014 for more than $44 million, a record for a female artist.

But the vibrant colors of the Southwest landscapes and New York skylines in her paintings have been deteriorating, and the Associated Press reports that researchers are hoping some 21st-century technology can help them find out why.

Partly funded by a grant from the National Endowment for Humanities, art preservationists plan to use 3D imaging to assess destructive chemical buildups in paintings by O’Keefe and eventually in collections from other artists in museums around the globe.

Rather than clip a postage-stamp-sized sample from the painting for analysis, researchers want to use high-grade images from various sources of light to assess chemical reactions that occur as paintings get older. Dale Kronkright of the Georgia O’Keeffe Museum in Santa Fe said the project began in 2011. “It now gives us a way to analyze the entire painting without taking any destructive samples whatsoever,” Kronkright said. “That’s a really big deal.”

Small blisters caused by soap can form when the fats in the original oil paints interact with the drying agents contained in many of the canvases used by 20th-century artists. Thousands of them can alter the colors of the painting, making it appear darker. “They’re a little bit bigger than human hair, and you can see them with the naked eye,” Kronkright said.

O’Keefe’s work presents a unique opportunity to study the chemical reactions in oil paintings, as the techniques and materials she used over her career are well-documented. Art preservationists still don’t know why the soap formation speeds up at certain times, although things like temperature and humidity changes are likely culprits.

The scientific studies will take place in Santa Fe and Chicago over a two-year period. Conservationists will likely study paintings under various environmental conditions, including non-visible light frequencies, to assess what triggers the soap-causing reactions and how to stop or slow them.

“Left unchecked, they will continue to grow, both grow in number and grow in size — and in damaging effect,” said Kronkright.