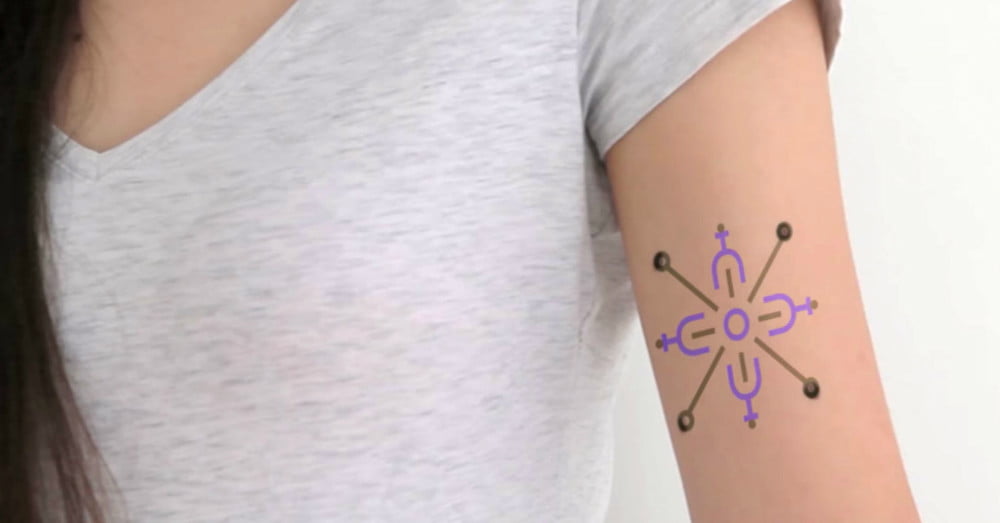 Some people get tattoos to express what is on their mind, but people may soon be able to use tattoos to show what is in their bodies. Dermal Abyss, developed by researchers at Harvard and the Massachusetts Institute of Technology, is the name of biosensitive inks used to make smart tattoos that change color as changes in your body occur.

The inks can measure the concentration of glucose, sodium, and pH in the skin’s interstitial fluid, which surrounds cells. The researchers have so far created a green ink that intensifies as the wearer’s sodium levels rise, which is often a sign of dehydration. Another green ink turns brown as glucose levels rise. In early tests, pink inks turned blue as pH levels increased

Researchers are still testing new inks, but can already foresee medical applications for a tattoo that tracks your internal health. The green ink that monitors glucose concentration could be used by diabetics who are required to check glucose levels regularly, sparing then from having to constantly pierce their skin to draw blood.

The researchers also say tattoos are just the start — other skin techniques such as henna, tanning, and makeup will be tested. Researchers also outlined the possibility of bar codes and QR codes potentially being encoded into tattoos using Dermal Abyss ink, which would enable the tattoos to store information about someone. So, the next time someone asks you what your tattoo means, you can tell them to scan it with a smartphone to find out.

This is not the first attempt at using tattoos to learn about a person’s health. In 2015, materials scientist John Rogers and a coalition of researchers created liquid crystal display (LCD) tattoos that can measure a body’s blood flow to monitor a heart’s health. Blood flow is measured by monitoring the changes in the body’s temperature, which cause the tattoo to change colors. Unlike Dermal Abyss, this LCD tattoo is really a removable patch that takes two weeks to show results.

Dermal Abyss is less invasive than inserting microchips in someone’s body, and may be more accurate than fitness trackers such as Fitbit, which have faced criticism over claims of inaccuracy. So, there’s a chance your next tattoo could come from your doctor.