Crash, bang, wallop! Researchers wreck hundreds of drones in the name of safety 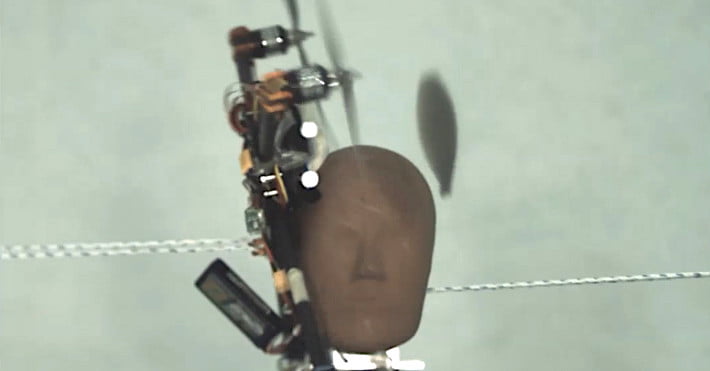 If Amazon ever gets its way and fills the skies with thousands of delivery drones, the worst thing that can happen to us folks on the ground is for one them to lose control and fall on our head.

The potential for accidents goes some way to explaining why the Federal Aviation Administration has been proceeding so cautiously when it comes to loosening regulations for businesses and organizations keen to make use of drone technology.

And that’s exactly why researchers are hard at work looking into the effects of drone crashes and how drone design can be improved to lessen the effects of any unfortunate impact.

A team at Singapore’s Nanyang Technological University (NTU), for example, has recently been willfully destroying hundreds of quadcopters in the name of research, smashing them at speed into the head of a crash test dummy, the Straits Times reported.

In a video that’s likely to provoke a wince or two, we first see a medium-sized drone dropped from the side of a building before scoring a direct hit on the dummy’s head. It makes a mess of the drone but more importantly, if the dummy was a real person, they’d be walking away with much more than just a headache. If they’re able to walk away at all, that is.

Next up is the “side impact” demonstration. This imagines a low-flying drone traveling at great speed before hitting someone in the head. The video gives you an idea of the kind of impact that could result, and confirms what you probably already knew: Having a drone career into your head is never going to end well.

Led by Professor Low Kin Huat from NTU’s School of Mechanical and Aerospace Engineering, the 10-person team have so far wrecked nearly 600 drones in the name of research, using machines weighing between 2.2 pounds (1kg) and 19.8 pounds (9 kg). To give that some context, DJI’s Phantom 4 Pro weighs 3.1 pounds (1.4 kg), while the Inspire 2 tips the scales at 7.25 pounds (3.3 kg).

Data from the research will help government agencies to make more informed decisions about drone regulations and offer drone makers pointers toward how they might improve the design of their machines for better safety.

With companies like Amazon keen to make drone deliveries in busy urban areas, the safety challenge is huge. The online shopping company was recently granted a patent describing how a drone could essentially self-destruct in mid-air should it get into difficulties, ensuring that its components come down over a wide area rather than crashing to the ground as a single, heavy unit.

The NTU team said another solution would be to carefully map routes that take drones away from pedestrianized areas, such as over the tops of buildings and covered walkways.

Similar research is being carried out at Virginia Tech, where researchers have suggested drone features such as “bumpers, enclosed rotors, and airbags” to help reduce the risk of injury in the event of a collision. But such components would have to be very light to avoid compromising the drone’s performance.