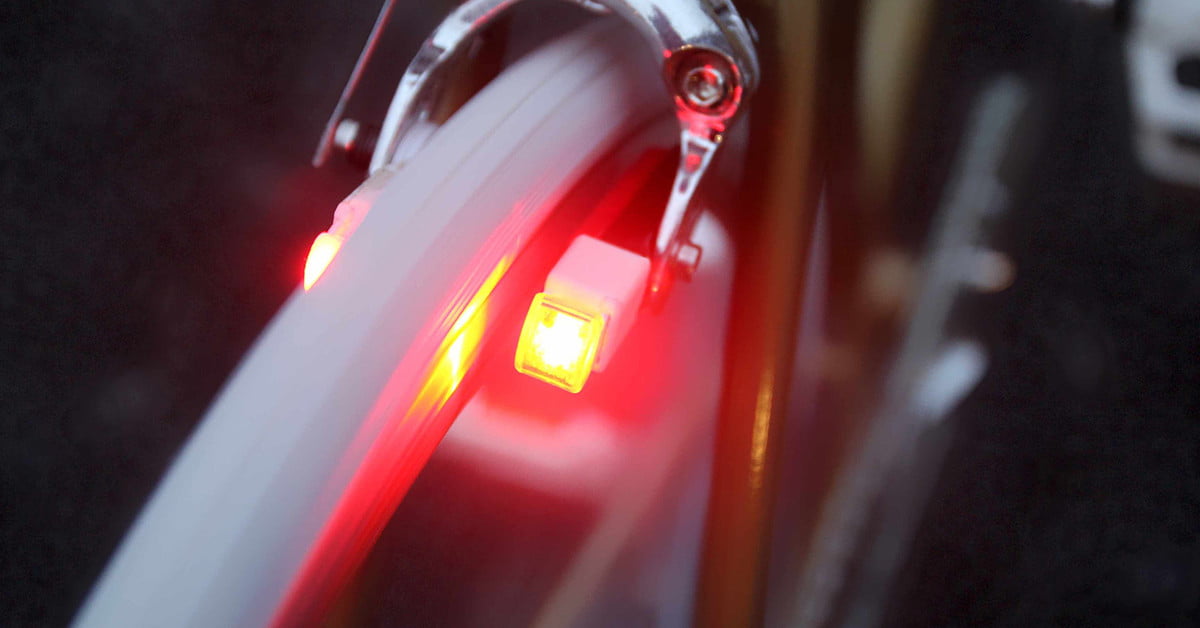 Cyclists generally have two options when it comes to lights: battery power or dynamo power. Battery power is reliable, easy, and cheap, but has the obvious drawback of replacement cost when the batteries run out. Dynamo powered lights use your bike’s spinning wheels to generate power, and therefore don’t require batteries. The downside is they cause friction that can slow you down, and they’re generally more expensive. German inventor Dirk Strothmann has come up with a device that aims to alleviate both problems.

The Magnic Light (portmanteau of “magnet” and “magic”) is a compact, contactless, dynamo-powered bicycle light that leverages a unique physical phenomenon, known as an eddy current, to generate power.

Even if physics wasn’t your strong suit back in high school, it’s relatively easy to grasp how eddy currents work. Think of a canoe paddle moving through the water. As it travels backwards breadthwise, small swirls of water are created along its edges, and remain swirling for some time after the paddle is removed from the water. These are eddy currents, and although this example pertains to fluids, the same phenomenon occurs with electromagnetic fields. When your bike’s spinning rim (the conductor) moves past Magnic Light’s built-in magnets, it creates an eddy current that powers a dynamo, thus producing electricity to illuminate its two LEDs.

Smartphones have come a long way in the past few years, but no matter how advanced they seem to get, they never seem to have enough battery power. Show me the most advanced smartphone you’ve got, and after 8-10 hours, I’ll show you a really expensive paperweight. Thankfully, there are tons of portable batteries that can help alleviate the problem, but even the best ones come with their own set of flaws and shortcomings — the most egregious of which is the fact that portable power packs often take forever to juice up. But what if they didn’t?

That’s where Apollo comes in. Thanks to its graphene-based composite battery tech, it’s smaller than many power packs available on the market, yet is allegedly able to recharge in just 20 minutes. It supports charging at up to 60W, which means that a battery with a capacity of 6,000mAh can be charged in as little as 20 minutes. You can also quickly charge gadgets with 40W, allowing the iPhone X and iPhone 8 to reach a full charge in just 90 minutes, as opposed to the usual three hours. The USB-C connection means that it’s compatible with the power adapters for the Nintendo Switch, MacBook, and Lenovo, Dell, and HP laptops. You can alternatively use a special adapter to get it to work with old laptop chargers or MagSafe adapters.

If you’ve ever used a Phillips screwdriver, you know firsthand just how frustrating they can be to work with. Turning a screw should be a pretty straightforward task, but for some reason, the shape of a Phillips bit makes it a delicate affair. You know what I’m talking about — one false move and the bit will push itself out and mangle the screw head, making it difficult (or downright impossible) to drive/remove the screw.

Ever wonder why this happens? Well as it turns out, it’s because that’s exactly what Phillips screwdriver bits are designed to do. They were invented back in the 1930s for use on automotive assembly lines, and their creator Henry Phillips deliberately designed them to “cam out” or push themselves out of the screw at a certain point so that they wouldn’t damage cars on the assembly line. The screws used back then were made of higher quality steel than the ones you currently buy at Home Depot, so this was an important feature at the time. Thing is, we use Phillips screws for a totally different purpose now, and the fact that the bits tend to “cam out” is more annoying than it is helpful to most users.

To remedy this problem, inventor Dan Pinckard has developed the Knife Edge, a new Phillips bit that not only prevents cam out from happening, but also allows you to turn damaged and otherwise unusable screws. As you’ve probably guessed from the name, the bit’s unique geometry causes it to dig into the screw head and lock in place when lots of torque is applied, so instead of slipping out and demolishing your screw head, it actually gets tighter. Check out the video to see it in action.

Tupperware storage containers might be the worst thing ever invented. Not because they aren’t useful — quite the opposite, in fact. I just hate them because they’re a monumental pain in the ass to clean and keep organized. They also come in a zillion different shapes and sizes, which means you inevitably end up with a cupboard stuffed with mismatched lids and warped containers. But what if there was a better way to store leftover food? What if there was as minimalist, durable, and infinitely reusable storage system that you could use with your existing dishes?

Enter the UniLid. It’s an ingenious system of stretchy silicon lids designed to replace your ridiculous Tupperware container collection. Because UniLids are  stretchable and elastic, they can fit over just about any bowl, plate, or other serving dish. The lids come in various sizes too, so you’ll always be able to find one that fits snugly over your container. And the best part? They’re completely dishwasher safe, and won’t warp when exposed to high temperatures.

Straws might not be the most obivous perpetrators of environmental damage, but despite the fact that they keep a pretty low profile (compared to oil spills and people who drive Hummers), they’re a fairly big contributor to the world’s growing plastic waste problem. Think about it. People in the United States use about 500 million plastic straws per day, and practically all of them are disposed of after use. That’s a hell of a lot of plastic waste. But what if there was an alternative?

That’s precisely where Lolistraw comes in. According to the device’s creators, “Lolistraw is made from Loliware’s patent-pending, seaweed-based material technology and is 100% plastic free, Hypercompostable, marine-degradable, and non-GMO. Seaweed is a renewable resource that does not require land resources and actually absorbs CO2, which is why a seaweed-based product has an environmental advantage. Many bioplastics are made from GMO crops like corn.”