Awesome tech you can’t buy yet: A clip for your dip and a toilet for your cat 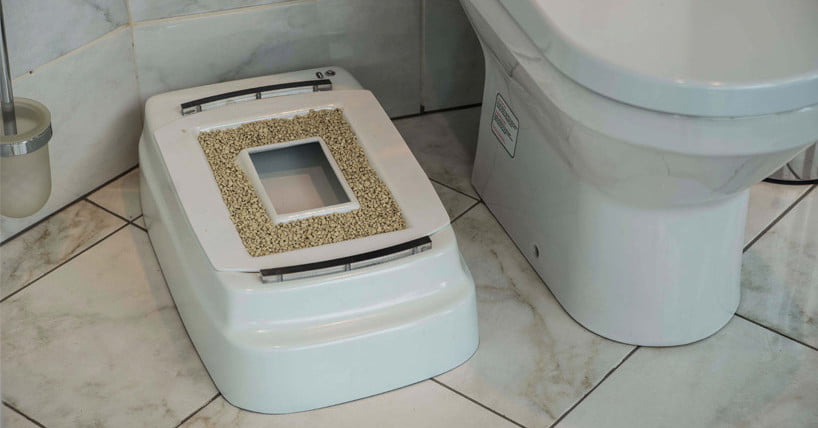 Automatic litter boxes are nothing new at this point, but as far as we can tell, there still isn’t one that’s fully automatic. No matter how smart your box might be, you still have to carry your cat’s poop to the garbage can when the collector bin gets full — but the brains behind Catolet want to change that.

“There are many automatic trays on the market, but they have a number of problems: some of them require a filler, they are large in size, and usually of high cost,” Tatyana Bayramova, creator of the Catolet, told Digital Trends’ Luke Dormehl in an interview. “Together with cat breeders, we decided to create a tray without those pitfalls. Our target market are cats and small dogs owners who like technology devices and gadgets. We want to offer them a modern device that will help them in their pet caring routine.”

Rather than asking Fluffy or Fido to sit on a toilet seat, the Catolet is based around a smart porous conveyor belt system. Urine passes through the belt, while solid waste is conveyed into the main basin after built-in motion sensors determine that your four-legged friend has concluded its business. The leavings are then run through a shredder, and dispatched into the sewer (yes, you have to connect it to your plumbing system). So in other words, once you have it installed, you never have to fiddle with the litter box ever again!

A few years back, a little startup called Mono+Mono released a clever device called the Sitpack. When folded up, it was an unassuming cylinder roughly the same dimensions as a can of soda. When unfolded, however, the cylinder became a seat. Two halves of the cylinder split and swung upward to create a seat, while a telescoping monopod extended down to the floor, effectively forming a sitting platform that could be collapsed or expanded in the blink of an eye. It was a clever idea, but Mono+Mono isn’t stopping there. Now, the company is back with a new and improved version.

The Sitpack Zen, as it’s called, isn’t just a refresh of the original design — it’s a complete overhaul. While it retains many of the same design elements in a broad sense, nearly every element of the Zen is a streamlined version of what you’ll find in the first generation Sitpack. Take the seat platform, for example. In the new device, users sit on a flexible Kevlar strap instead of a hard (and uncomfortable) plastic platform. The Zen is also made from materials that are both stronger and more lightweight than its predecessor, making it easier and more convenient to take along to concerts, conventions, and any other place where you might need a seat.

If you ride your bike (or anything else that isn’t a car) at night, you know how important is to stay visible. In places where the roads don’t have wide shoulders, or where there aren’t enough streetlights, or where people just drive like maniacs; good reflectors and bright lights can be the difference between getting home safely and getting scraped off the pavement by a roadkill cleanup crew. But despite the fact that hi-visibility clothing is readily available and affordable these days, most reflective gear suffers from the same drawback — it only reflects light when hit at a certain angle.

The stuff you’ll find on most hi-vis gear is retroreflective — meaning it bounces light back directly where it came from. Most surfaces reflect light by diffusing or scattering it in all directions, but retroreflective material is specially designed to reflect light back at the exact same angle as it arrived from. That’s a problem though, since it’s only visible when the light source hits you directly. Flectr 3D changes that. Thanks to their clever design, these suckers bounce light in 360 degrees — thereby making you visible from all angles.

Ever sipped a glass of good wine and wondered where it came from, why it tastes so good, and how its different than other varietals? Probably not. But if you have, and you also wished there was an electronic device that could answer all those questions for you, then we have good news for you. That gizmo is here, and it’s called MyOeno.  Stick this sucker into your glass, and it’ll analyze your wine and send the details to your smartphone. It can detect such characteristics as strength, tannins, acidity, evolution, and more. You can then add your own preferences to this information in the form of tags, so that over time, you build up a more personalized database of your likes and dislikes, which will help you avoid wasting money on a bottle that you’re unlikely to enjoy.

The technology that makes it work based on near-infrared spectroscopy. Specific wavelengths are emitted by the device and, based on the absorption of each wavelength by the wine, MyOeno’s algorithms can discern particular characteristics. Note that there are already sophisticated analytical tools, such as mass spectrometers, available on the market and aimed at wine-making professionals. But these tools are costly, laboratory-based, and often require damaging the sample.

Normally, we include stuff in this list because it’s innovative, clever, or might have a positive impact on the world. DipClip made this week’s list for none of those reasons. We’re putting it in Awesome Tech You Can’t Buy Yet simply because it’s too absurd (and successful) to ignore. It’s essentially a bracket that you can clip onto your car’s AC vents, and use to hold dipping sauce packets from all major fast food chains. This presumably makes it easier and more convenient to dunk chicken nuggets in honey mustard (or whateverthehell you like to dip your nugs in) while you’re in your car. That’s it. That’s all it does.

But that’s not what’s amazing about the DipClip. What’s really blowing my mind right now is that, at time of writing, this project has gathered up more than $40,000 from nearly 2,000 backers. That’s nuts. If you don’t already have faith in the power of crowdfunding platforms like Kicktarter and Indiegogo, then DipClip should make you a believer. If you have an idea — no matter how seemingly stupid, inconsequential, or unnecessary it may be — rest assured that there’s a group of people on the internet who will support you and help bring that idea to life. You just have to find them!