Awesome tech you can’t buy yet: 8K VR, smoke-free fires, a drone for your home 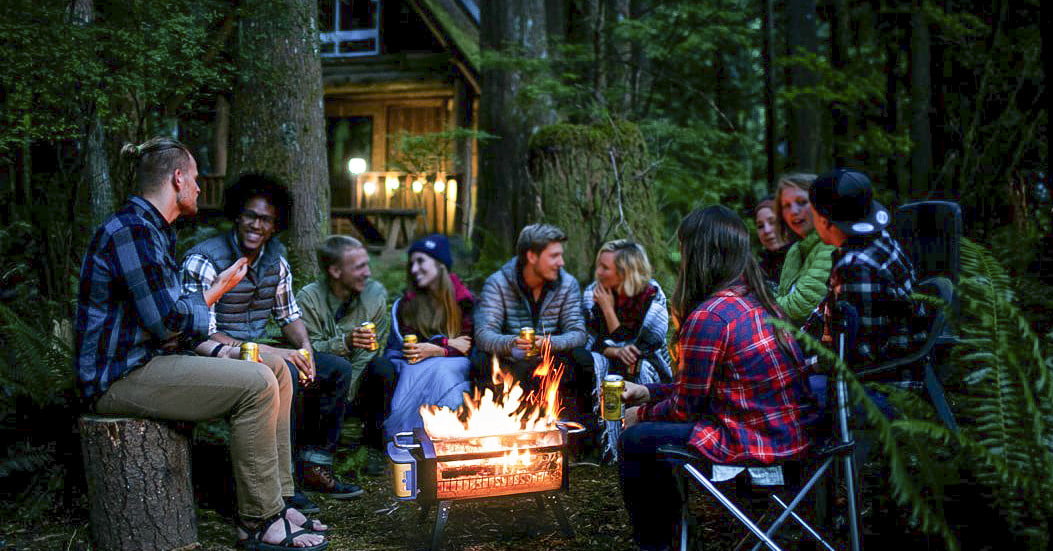 At any given moment, there are approximately a zillion different crowdfunding campaigns happening on the Web. Take a stroll through Kickstarter or Indiegogo and you’ll find no shortage of weird, useless, and downright stupid projects out there – alongside some real gems. We’ve cut through the Pebble clones and janky iPhone cases to round up the most unusual, ambitious, and exciting new crowdfunding projects out there this week. That said, keep in mind that any crowdfunding project — even the best intentioned — can fail, so do your homework before cutting a check for the gadget of your dreams.

VR headsets have come a long way in the past few years. Ever since the Oculus Rift reignited the world’s enthusiasm for virtual reality, tech companies have been in an arms race to develop better and better headsets. Today, VR enthusiasts have a smorgasbord of different options to choose from — everything from the accessible and affordable Samsung Gear VR, all the way up to the industry-leading HTC Vive. But in many ways, the competition is just starting to heat up — especially now that Pimax’s much-hyped 8K headset has landed on Kickstarter.

On paper, the Pimax 8K is an absolute beast. With a resolution of 3,840 x 2,160 per eye, a refresh rate of 90Hz, and a 200-degree field of view, it’s easily one of the most hi-spec VR headsets ever conceived. To put that in perspective, the current VR heavyweights, the Oculus Rift and HTC Vive, both boast 1,080 x 1,200 pixels per eye and a meager 110-degree field of view. With all those extra pixels, Pimax aims to offer “the ultimate VR experience” — one devoid of the dreaded “screen door effect” that many currently-available headsets suffer from.

Biolite originally won the hearts of the outdoor community with its gadget-charging, biomass-burning Campstove, which was first released back in 2013. And in the past couple years, the company has increasingly branched out and expanded its product offerings. And the best part? For its latest product (an ultra-efficient, power-harvesting fire pit) the company has once again turned to Kickstarter, so if you hop on the Biolite bandwagon and pledge your support early, you can snag one for a discounted rate.

The company’s new Firepit, as it’s called, incorporates some innovative features that are designed to drastically improve the traditional campfire experience. The designers at Biolite know that most of the smoke generated from such fires is a result of how inefficiently wood tends to burn. To change that, the FirePit features a built-in fan that pushes air through 51 individual jets, providing more oxygen directly to the flames. This helps the wood to burn more efficiently, resulting in less smoke and a warmer, more fuel-efficient fire. In other words, no more switching seats because the wind changes and blows campfire smoke in your face!

In a world where smartphone owners have an endless library of games at their fingertips, it’s increasingly difficult to justify buying a handheld gaming console like a Game Boy or PlayStation Vita. That said, standalone gaming devices still have some distinct advantages. If you’re in the market for something that’s portable, has physical buttons, and won’t bombard you with app notifications while you play, then the latest Arduboy might be worth looking into.

For those of you who might not be familiar, Arduboy is a miniature game system the size of a credit card. It comes installed with a single 8-bit game, and can be reprogrammed from a library of open source games available online. Until recently, the creators of the system generally let the community make games that you can play on Arduboy, but now they’re flipping the script.

Arduventure is a home-brewed RPG that’s purpose-built for the Arduboy console. Back the project now and you can be one of the first to play it. Oh, and don’t worry about the dreaded Kickstarter failure on this one. Arduboy has been producing these systems for the past couple years and has worked out all the kinks in the manufacturing process, so as soon as it’s done with the software, it’ll ship!

Some ideas you hear about in the tech world are so “now” that it’s like they were birthed by popular culture itself. Others make you feel like you’re living in the future. Aire is definitely one for the latter category. Launched on Kickstarter earlier this week, the Aire is described as the first self-flying robot designed specifically for the home. It’s essentially a drone security camera that flies around your house investigating any security alerts, snapping photos of you and your family (if requested), or just keeping an eye out for anomalies.

“Unlike typical drones, which are optimized for outdoor flight, Aire is meant to be operated around people so we focused on safety, approachability, industrial design, and user experience with an emphasis on sound quality,” creator Jeffrey Tseng told Digital Trends in an interview. “With this in mind, we decided to go with a flight platform called a ducted fan, which is far more complex than a quadcopter, but was able to satisfy our vision of building a human-friendly flying robot. To complement the novel mechanical flight platform, we added processors, sensorsm and software very similar to what you would find in a self-driving car to enable intelligent behaviors.”

We’ve said it before, and we’ll say it again: humanity is living in the golden age of rideable technology right now. In the past few years, electric motors have become smaller and more powerful, and batteries have become more capacitous and long-lasting. The two trends that have coalesced and kicked off a renaissance in personal mobility devices.  There’s almost too many of them to keep track of anymore. Between all the electric skateboards, gyroscopically stabilized unicycles, and motorized skates, staying on top of all the new rideable gizmos that get announced each month is near impossible.

Case in point: this ridiculously badass ebike from Delfast. It straddles the line between electric mountain bike and electric motorcycle — but its beefy, fat-tire design isn’t even its most important feature. What sets the Delfast ebike apart from the rest of the pack is its range. According to the bike’s creators (who got their start running courier service that relies on a fleet of efficient, all-terrain ebikes), a fully-charged Delfast electric bike can travel up to 236 miles before it craps out and needs to be juiced up again. We can’t confirm that those numbers are legit or not, but even if they’re remotely close to the truth, this bike will have a a ridiculous reach when it rolls off the production line.