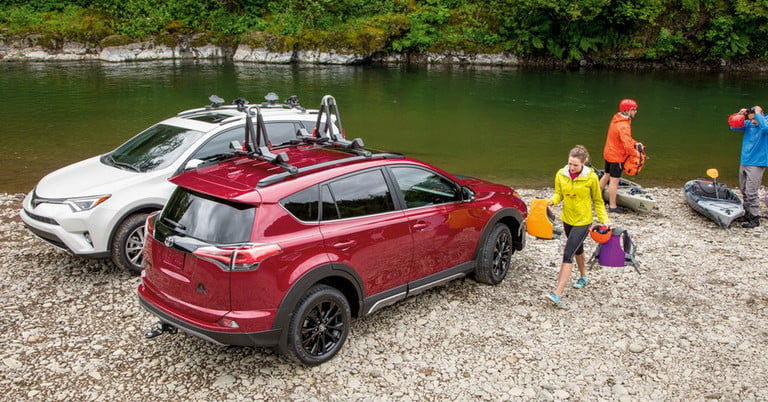 If you found this article because you’re considering buying a 2018 Toyota RAV4, you have plenty of company. RAV4 sales have soared in 2017, eclipsing those of the two other top-selling compact SUVs, Honda’s CR-V and Nissan’s Rogue. Through September 2017, U.S. buyers have bought more RAV4s than any other vehicle except the big three pickups, the Ford F-150, Chevy Silverado 1500, and Dodge Ram 1500.

Other than the invulnerable light pickup trucks, crossovers are leading in vehicle sales this year, with the RAV4, Rogue, and CR-V scoring fourth, fifth, and sixth place in U.S. new car sales, respectively. This market dominance represents a big change from 2016 ,when positions four through six were held by the Toyota Camry, Toyota Corolla, and Honda Civic respectively. The crossover lead isn’t only relative to other vehicles, as all three models are each significantly ahead of their own 2016 sales pace for the first nine months of 2017, with the RAV4 in the lead.

If your definition of an SUV requires a truck chassis, then car-based vehicles like the RAV4, CR-V, and Rogue should be called crossovers. Toyota hedges its bets with the classification, listing the RAV4 in the “SUVs and Crossovers” category without differentiating between the models.

The 2018 RAV4 is the sixth year of the fourth-generation RAV4, which started with the 2013 model. Not much has changed this year other than one new trim version, the 2018 RAV4 Adventure, introduced in September 2017. The Adventure has exclusive exterior and interior styling and functional components that equip the new trim level for outdoor sports activities — but don’t confuse it with an off-road four-wheel drive SUV, because that isn’t the case. See more on the RAV4 Adventure below.

All 2018 RAV4s are equipped with a 2.5-liter 4-cylinder DOHC 16-valve engine equipped with Dual VVT-i. The gasoline-powered motor produces 176 horsepower at 6,000 RPM and 172 pound-feet of torque at 4,100 RPM with a six-speed automatic transmission. In the three RAV4 hybrid trim models, the engine nets 194 net horsepower when combined with an electric motor and hybrid battery. The hybrids swap the six-speed automatic for a continuously variable transmission (CVT) and gain electronic on-demand all-wheel drive, using the electric motor to add power to the rear wheels when needed.

There are nine different 2018 RAV trim levels, including three hybrids. The hybrid models include AWD, but the gasoline-engine-only versions offer AWD as a $1,400 option. The one exception is the Adventure trim, for which AWD is a $700 upgrade. To help differentiate between the RAV4 trims, we’ve divided them into three trim levels we refer to as “standard,” three “sporty,” and three luxury versions.

The 2018 RAV4 XLE Hybrid, starting price $29,030, adds the XLE upgrades, along with a smart key system with push-button, the dual-mode powertrain, and intelligent AWD.

If the concept of a “sporty” hybrid sounds contradictory, that could be because most of the earliest hybrids’ styling was most politely described as “bland.” But don’t forget that electric power delivers torque instantly. The 2018 Toyota RAV4 SE Hybrid (starting price $31,185) has the features in the XLE Hybrid, plus LED auto on/off headlights, LED daytime running lights, 18-inch sport alloy wheels, the smartphone connected navigation app, and a 4.2-inch TFT multi-information display. The SE Hybrid also includes SofTex upholstery with an eight-way power driver’s seat with lumbar support and sport bolsters, heated front seats, a remote power liftgate, and a blind spot monitor and rear cross-traffic alert.

With a $34,030 starting price, the 2018 RAV4 Limited Hybrid has all the goodies in the SE Hybrid plus 18-inch chrome alloy wheels, and heated power outside mirrors with turn signal and blind spot warning indicators. The Limited Hybrid also has an integrated navigation system and app Suite, a 4.2-inch multi-information display, SofTex eight-way power driver’s seat with bolsters and lumbar support and memory, heated front seats, a remote power liftgate, and the blind spot monitoring system with rear cross-traffic alert.